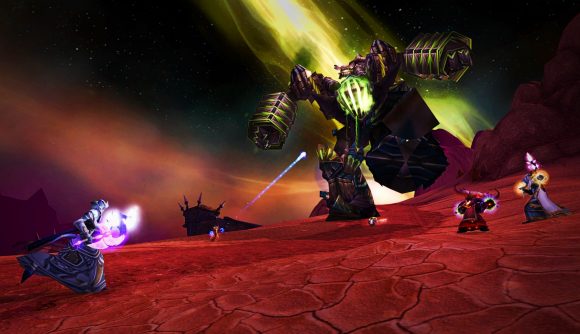 Whoops, it looks like Blizzard may have let a wee detail slip regarding WoW Classic’s Burning Crusade server. Tongues were sent wagging when several people noticed an article on BattleNet titled: “On June 1, return to Outland in World of Warcraft: Burning Crusade Classic”. No one could click through, but plenty took to Reddit to share what they saw (thanks, Wowhead).

While Blizzard hasn’t confirmed or denied it since the timeframe certainly makes sense. WoW Classic’s Burning Crusade is currently in beta, and is pencilled in to release at some point this year. We’ve reached out to Blizzard for comment, and will update this story if we hear back.

We first got the Burning Crusade way back in 2007. It’s about a demonic faction called the Burning Legion, and it takes you to an area called the Outland. If you’re a fan of the Alliance, you can take to the new server as a Draenei, while Horde fans have Blood Elves. Content is being rolled out in five stages, and you can clone your character if you can’t decide if you want to move over to the new Burning Crusade server or stay with your buds.

Blizzard hasn’t said much else on the Burning Crusade release date, but World of Warcraft director Ion Hazzikostas previously noted that the server is “very unlikely” to release alongside WoW Shadowlands’ Chains of Domination update, though we don’t have a release window for that either.