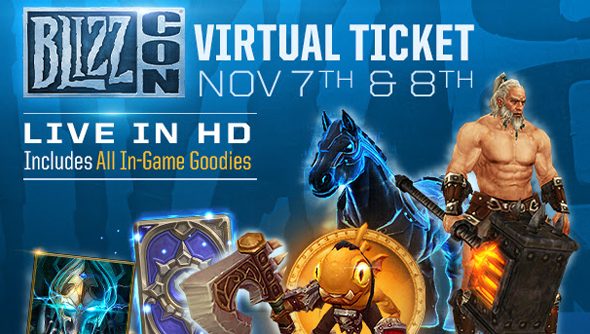 Between the StarCraft WCS, Hearthstone world finals and inevitable announcements of the opening ceremony, some would say that watching the BlizzCon stream is its own reward. But Blizzard wouldn’t be among that number: they’re determined to bribe you with trinkets and treats for every one of their five undying PC games.

Blizzard are offering a Virtual Ticket for BlizzCon – a steep, $39.99 entry fee that guarantees you HD streams of every match, panel and ceremony on November 7 and 8. You’ll also get keys to a handful of cosmetic desirables, designed to be shown off in each of the studio’s contemporary games.

WoW players will gain a level 1 Grommloc – a fish-eyed pet who sports an axe bigger than his head. StarCraft veterans will enjoy a BlizzCon-themed portrait and decal – the emblem that appears at bases and on some units.

Diablo III players will be given unique transmogs – transfers, essentially, that can be plastered on the side of a weapon. Hearthstone players will get a BlizzCon card back. And those of us lucky enough to be in the Heroes of the Storm alpha will pick up a brawler portrait and nexus charger – an ethereal mount, apparently, rather than a smartphone accessory.

Do you think you’ll buy your way into Irvine’s annual cosplay shindig from afar?