Looking for some great Classic WoW addons? One of the features that has changed dramatically since World of Warcraft launched nearly 16 years ago is how much players are willing to alter the basic user interface to streamline the experience and eradicate even the smallest inconveniences.

In vanilla WoW, player additions to how WoW looked and gave them feedback and information were very limited. Some offered a svelte way to report additional information across the top or bottom of the screen. Others provided small, discreet windows with additional displays, whether they were for specific Classic WoW classes, or to track an item that was obscured in the default UI.

Today players tweak nearly every part of the game’s interface. All-in-one packages such as ElvUI change everything from the minimap and spell bars, to damage and healing numbers, and even the chat logs. Some of that is because WoW’s default UI is in desperate need of an overhaul, given that modern principles of usability weren’t pervasive 16 years ago. Some is because today’s Warcraft players are more familiar with the game and technically savvy about what mods can do and how to install them.

The good news for modern players returning to Classic WoW is that addons now exist to provide at least a few contemporary conveniences to the original version of the game. While nothing will provide all the quality of life improvements WoW itself has added over the years to one of the best MMOs of all time, these will give you a few important windows into modern life – nostalgia ain’t all it’s cracked up to be.

Here are a few of our favourites:

Deadly Boss Mods is a must-have WoW addon for 2020 players who participate in group dungeon and raid content, so we’re grateful there’s a WoW Classic addon version. It gives you warnings for events that are happening during boss-fight encounters, timers for when the next events in the fight are going to happen, and advice for what to do as a result.

DBM-Classic comes with voice packs in English, German, Italian, Spanish, Russian, Chinese, and Korean along with a couple of packs spliced together from celebrity voice tracks. It includes timers and information for the five-man dungeons Deadmines, Wailing Caverns, Shadowfang Keep, The Stockade, Ragefire Chasm, Blackfathom Deeps, Razorfen Kraul, Razorfen Downs, Gnomeregan, Uldaman, Scarlet Monastery, and Zul’Farrak. The developer notes that functionality for the vanilla WoW raids has been built, but couldn’t be tested during the Classic Beta due to level caps.

This simple addon for the WoW Classic Auction House won’t help newcomers, but will save trade veterans a lot of time and effort by simplifying inputs, searches, and letting you spam the buy button to purchase in bulk. If you plan on making a lot of gold through the AH then this is a great time-saving WoW Classic addon.

Questie attempts to provide one of the most useful features of modern WoW’s map UI: the ability to see where quest objectives and turn-ins are located. This WoW Classic addon is still a bit of a work in progress, but it solves one of the most frustrating aspects of Classic WoW. Quest descriptions in vanilla varied widely in their wayfinding tips, so sometimes the area where the thing you were supposed to find/kill/collect wasn’t immediately obvious.

In addition, Questie attempts to add tooltips to quest-related mobs (also like modern WoW) and to show quests that are available and not yet completed by you. It’s an essential mod for Classic players.

OmniCC is a lightweight little mod that adds digital countdowns to pretty much everything that has a cooldown in World of Warcraft: your spells, your abilities, even items in your inventory. Providing much more specific information than the traditional analog timer sweep in Classic, this vanilla WoW addon allows you to make intelligent decisions about what you can do next when you’re in a fight.

It turns out that the Live version of OmniCC works perfectly in Classic, so a helpful developer dressed it up and reposted it for vanilla players. As a note, this means that you can download the current version as well, if you like, as long as you enable out-of-date addons in Classic WoW (so that the version number doesn’t trip up your install.

The features of Details! remain largely the same from Live to Classic. The video below shows the basic features of this incredibly deep combat damage and healing information gathering and display mod. 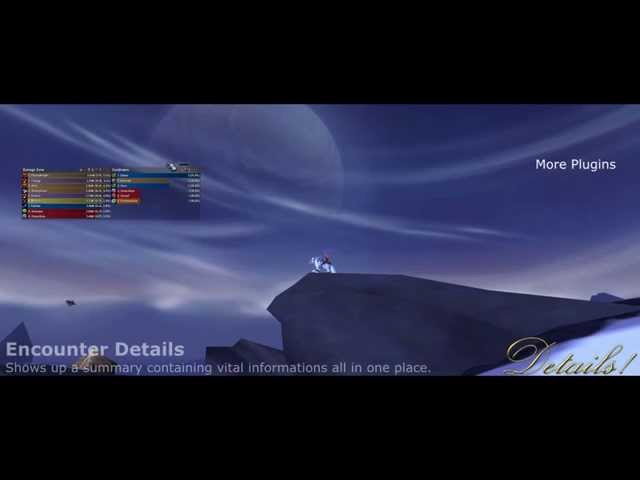 Back in the day you could raid every instance available in Vanilla WoW, including original Naxxramas, and somehow make it through without a damage meter. But we’d rather not have to go through that again today: so much of min-maxing your character in Live is about figuring out how to better yourself by seeing what works and what doesn’t, and you don’t have to give up that information in WoW Classic thanks to this addon.

More guides: Our rundown of the best Classic WoW Professions

Details! is a common, complete damage-and-healing meter in the current game, and this is the Classic version. It collects all information available from the combat logs from the game and presents them in a legible easy bar-chart format, either for an overall encounter or for a particular ‘segment’ or boss fight. You can drill in on a particular character to see what they cast and where their damage came from, which is useful if you’re not keeping up, or are leading a raid and want to understand why one person is performing well or poorly.

Leatrix Plus is an incredibly convenient collection of quality of life improvements. You’ll have to head over to the Leatrix Plus mod page for the full list, but some of the features include automatic junk selling, a customisable minimap, visible durability status, cooldowns, and free bag slots. It also includes automatic stand and dismount so you don’t get prevented from casting, faster looting, and auto-accept on quests, summons, and resurrection.

This addon is a must for raiders, particularly raid leaders. It contains several different modules to provide a wealth of information on the raid, including all the cooldowns, the fight logs, status of battle resurrection, a timer, and a useful note section to send helpful information and/or furious chastisement to all raid members. Exorsus Raid Tools also allows you to inspect all the raid members and check them for buffs to make sure everyone is present and correct.