Brace yourself, WoW Classic fans – Blizzard’s dropping another update for the game today, and it’s a big ‘un. The World of Warcraft Classic 1.13.3 patch adds some of the most highly anticipated features to the game, including new PvP Battlegrounds, Elemental Invasions, and more.

First up, the new WoW patch brings two Battlegrounds to 2006-style Azeroth, giving both Alliance and Horde players access to Alterac Valley and Warsong Gulch, each with their own challenges to get your teeth into.

Alterac Valley offers a “large 40v40 tug-of-war zone” packed with quests, objectives, and areas to explore. Players who have hit level 51 upwards are put into a “single-level range in this epic struggle” – and there are reputation and quest rewards up for grabs, like Lei of the Lifegiver, Don Julio’s Band, and Ice Threaded Arrows and Bullets. Both Alliance and Horse players can get into Alterac via the northern Hillsbrad Foothills. 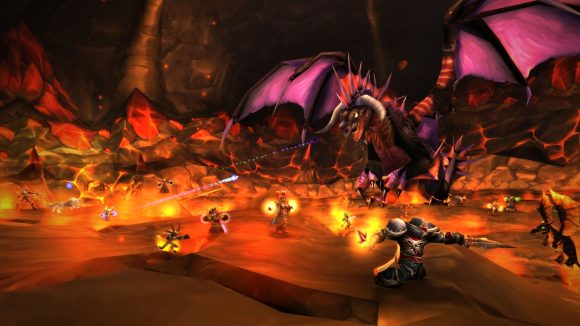 Reach the Gulch through Silverwing Grove in Ashenvale if you’re Alliance, and if you’re Horde, head to the Mor’shan Base Camp in the northern Barrens. Both Warsong Gulch and Alterac Valley can also be accessed by speaking to the the battlemaster in your capital city – so, Stormwind or Orgrimmar, depending on your faction.

The patch also adds Elemental Invasions, meaning that now “across Kalimdor, Blazing, Thundering, Watery, and Whirling Invaders now occasionally appear in Un’goro Crater, Azshara, Winterspring, and Silithus respectively.” It looks like they’re testing the boundaries of the territories, trying to see how far they can get in before they get halted by the Horde and Alliance.

In addition, WoW Classic players now get a ‘Keyring,’ accessed via the key button in your micro menu. This gives you additional space to carry up to 12 keys. Plus, the patch brings some bug fixes. Sweet.