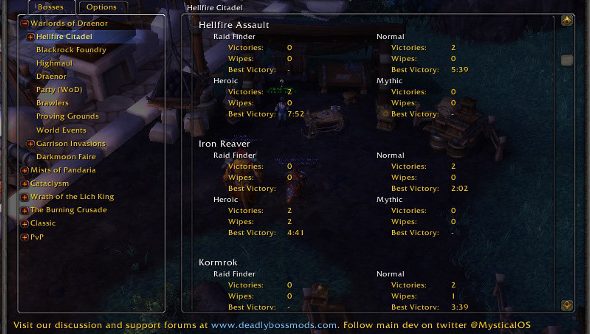 If you’ve played World of Warcraft at any of its many endgames, or even while levelling, you’ve probably used or grouped with somebody using one of the most popular WoW addons, Deadly Boss Mods. It is as much a part of the game’s raiding and dungeon-running environment as tanking and phat epix. Now it’s on Patreon, letting fans contribute to development and keep it going after more than a decade as a premier piece of the raiding arsenal.

WoW sits in pride of place atop our list of the best MMORPG.

For the unfamiliar, Deadly Boss Mods is essentially an in-game how-to on each and every world boss, dungeon pack or other in-game challenge present in the game. It gives alerts whenever moves are used, provides cooldowns when possible, lets you know to move the hell out of the way when you’re meant to – it’s madly useful.

It’s also updated for each and every expansion and patch at extreme speed, and generally makes the game a more fun experience for all involved. There’s an element of walkthrough about it, but mostly it serves as a reminder for knowledge you’ve already gained, or a way to take a look at new dungeons without having to slog through a guide first. You can read more about it over on the official site.

Until fairly recently it was partnered with hardcore raiding forum Elitist Jerks, allowing creator Adam Williams to work full-time on the mod from home while managing that website. Due to the way WoW has changed over the years, EJ is no longer as viable as it once was. Therefore, DBM’s support has moved to Patreon, where it’s already making a modest $1,254 a month.

Part of the reason for the switch is Legion is proving a tougher nut for Williams to crack than previous expansions. Not only is it more complex, but he’s spending more time creating DBM for it than he ever has before. He says that “the mods I’ve created so far are some of the most advanced mods included in DBM” and that it has taken a ludicrous number of hours gathering data, testing on the PTR and getting feedback.

The current total puts the Patreon within fifty bucks of its second goal, at which point Williams says he’ll be able to recommit to full-time work on DBM with 24/7 support. $1,300 a month isn’t exactly busting the bank, so he has a further goal of $1,750 which will unlock 3rd party commissioning when needed. Chuck some money his way if you feel the mod gives you appropriate value.