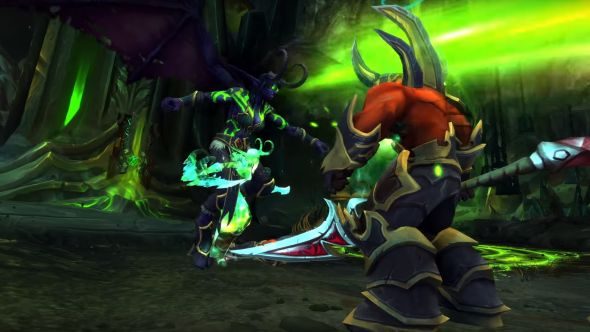 What to add to a game as old as World of Warcraft? Where can the formula be pushed that it hasn’t been before? That’s the challenge faced by the team at Blizzard every day, more so when expansions roll around. Get it wrong and they end up with unhappy players, anger and dipping subscriber counts. Nail it and there’s a whole host of new problems created – what will break, and how?

This epitomises the Demon Hunter, WoW’s newest class. They’re designed to be mobile, dashing around targets to do additional DPS, a melee class that wants to move around, not sit idle tapping through their rotation. They can double jump and glide through the air, see through walls with Spectral Sight – they’re the coolest thing in the game, out of the box, and that can make them difficult to handle.

Blizzard also gave us the low-down on exactly how Legion’s Demon Invasions and dark whispers will work.

“[Players] are definitely going to find some interesting ways to interact with both new and old content,” says Jonathan LeCraft, game designer principally responsible for Demon Hunters, in regards to the impact of new movement tools. “It hasn’t proven to be a huge issue, definitely people have done some very creative things for skipping content – but skipping content has been possible before with things like group stealth and invisibility potions. There’s no question that they’re going to get to some places that they shouldn’t be. We’ll just take that as it comes.”

Luis Barriga, also a game designer working with Demon Hunters (who we spoke to last year about theirimpact on WoW), points out they’ve already applied fixes in problem areas, but in a lot of cases it’s not seen as an issue.

“We definitely have addressed some of the more egregious bugs where you could double jump backflip on top of a lamp-post in the arena and not be reachable by a melee class,” he explains. “There’s more benign cases of ‘hey, in this Legacy Raid I can skip these three bosses and I can farm this one boss that I want a lot easier.’ We’re really fine with that, it doesn’t bother us too much.

“Same with Spectral Sight, if I can see invisible mobs or see them behind a wall in some instance, that’s by design, that’s what we intended players to be doing with the class.” 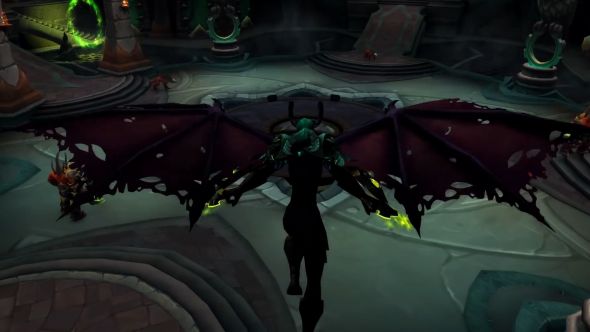 In the same vein, nobody’s going to get banned for finding holes created by the new designs – and Blizzard do have a contingency plan for if things go badly wrong.

“Like John said, it wouldn’t be much different from what’s happened before with stealth groups,” continues Barriga. “You get a bunch of druids and rogues and you go do a 5-man faster than you could normally. Certainly as you get towards high-level raids and stuff like that, if there are problems we might install temporary fixes – we have [the ability to] hotfix areas to disable certain Demon Hunter abilities, but that’s like a last resort. Sort’ve like the catastrophic failure.

LeCraft has actually found it more challenging injecting mobility into their combat kit. “Double jump and [Spectral Sight] is probably the least of the issues that we’ve had to solve versus trying to get mobility into the rotation. That’s definitely something new with this class. 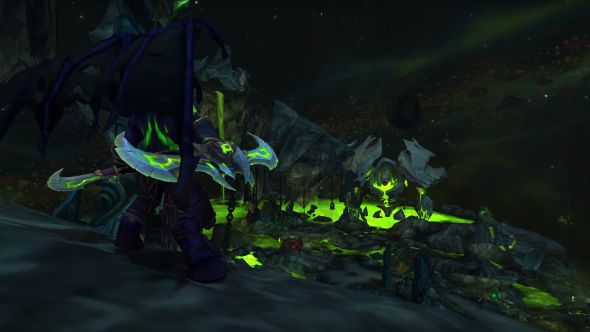 “It’s been interesting because players have been mostly trying to get around it, and so we’ve been trying to figure out ways to either prevent that or, ultimately, if it comes down to it we’ll look into a design change, but not before Legion release. That’ll just be something we’re keeping an eye on.”

In beta, players have gravitated towards a talent called Momentum, which causes the Demon Hunter to deal increased damage for a few seconds after they use mobility skills, purely because of power. Some hate the idea of having to use their movement tools for damage, leaving them vulnerable the next time the boss drops a pool of fire, while others have used clever techniques to remain rooted in place despite using these skills.

Neither is what Blizzard are hoping for, but the live environment of thousands of max-level Demon Hunters will be needed before changes are made. LeCraft says they have nothing major planned but points out, laughing, that things change fast when the game goes live. Barriga also says that the minor tuning they have left to do “can have major impact on things, so with certain builds being more popular than others, certainly a couple of number tweaks can have that sort’ve butterfly effect where new builds become viable.”

Creating the class as a whole had its own challenges – Demon Hunters fit a niche that has been asked for by players for more than ten years, and one that Blizzard has tried to make stop-gaps to fill over that time. Making the Demon Hunter more than a Rogue with funnily shaped blades, or a melee Warlock, had its own difficulties.

“I think the Demon Hunter was a challenge in that regard,” says LeCraft. “But it was also easy because one of the things that gave us a lot of strength there was their deep lore, the ways their abilities look with the fel magic, everything from their weapons to their blindfolds, their appearance and just the way they fight gave us a lot of opportunities to kind of mix it up with the mid-range stuff and some really heavy magic combined with this … I wouldn’t say unparalleled mobility, but very high mobility.”

Barriga chuckles at LeCraft’s careful choice of words – WoW players can get very particular about it – saying “I’ll stand by that claim, that they have unrivaled mobility. When you think of, like, double jump into glide, in a 3D space like we have – Monks have really good mobility too, it’s just a different type of mobility. I think once players do an outdoor zone with a Demon Hunter – yeah, you could compare other classes to the Demon Hunter’s mobility to a certain extent, and in certain situations like if a Rogue blows cooldowns they might be able to kite a Demon Hunter, but that’s not really what we mean.

“It’s the feel of the class – you see your objective behind a mountain and you just go. You jump over bridges, you double-jump-backflip over mobs of enemies, it’ll be very clear once people play a little bit of the prerelease stuff.” 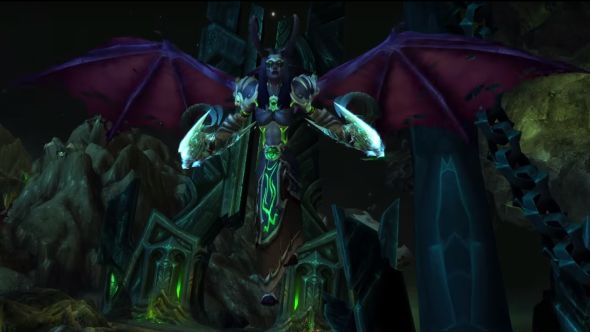 Another designer, Jeremy Feasel (who spoke to us mainly about demon invasions, linked above), explains that there’s a method to starting on a new class in a crowded design space, as melee characters in WoW are.

“When we’re coming to a new class, the thought is a lot of what is the coolest thing we can do, what is the most lore appropriate, what have players been asking for, what have we been wanting to do ever since we fought Illidan or played with him in Warcraft III?” he says, going on to point out that other elements of the team often have to adjust too.

“It ends up being a difficult space for the encounter designers probably more than anybody else. They have to keep in mind now that raids may be a little more melee heavy than they were before, and it’s something that has to be enveloped into their design. That said, we had that discussion very, very early on in the process and I think you’ll see a little bit more attention paid to the location of melee players [in high-level raids] this time around.” 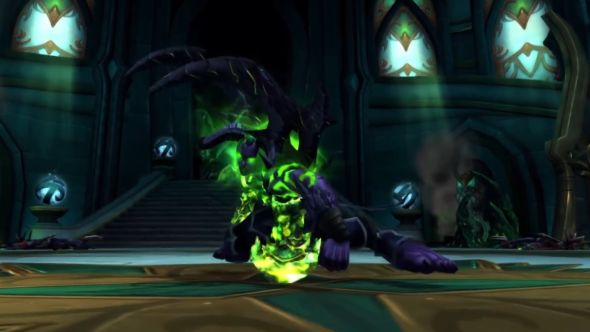 When Demon Hunters aren’t making mad dashes around the place to maximise DPS and get the boss dead in the Havoc specialisation, they’re equally capable of taking punishment as a tank – or, at least, that’s the plan for the Vengeance spec. To do this, says LeCraft, they sacrifice some amount of moment-to-moment mobility.

“There’s a little bit of a departure from the extreme mobility with the tank [spec], the theme there is that they are inquisitors of demons and they’re actually used to being in close proximity to them. So they rely more heavily on the magic and their abilities to inflict pain and harnessing that pain as well. They’re not quite as heavy as Havoc [on the mobility], they do still have double jump and glide, that gives them some flexibility there – but in general tanks are supposed to be rooted in place for periods of the fight, and they’ll excel at that.”

Barriga explains further: “Compared to Havoc their mobility isn’t a part of the moment to moment gameplay, however they have great ‘burst mobility.’ That comes in handy for fights where they need to tank swap and reposition and be somewhere else completely in a very short amount of time. If you’re supposed to tank one mob on one side of the room and then switch to pick up adds on the other side, they’re really excellent at that.”

Blizzard say they’re confident about Demon Hunters and their place in the game, and happy with the feedback they’re seeing. There’s always work to be done, but new classes have always gone down very well in the past, finding new sections of the playerbase to latch on to. Like everything else, it’s about to be hit by the full force of one of gaming’s most demanding playerbases – we’ll see how that pans out in the months ahead.

Legion’s out August 30, with pre-orders getting you access to Demon Hunters – capped at level 100 until Legion launches, like everyone else – from August 9 in the US, 10 in the EU.