World of Warcraft’s Legion expansion has something of an addiction the secrets. Between Kosumoth’s orbs and long-forgotten hippogryphs, the community has already started digging them out. The most sought-after by the majority, however, are the hidden artifact skins. Each specialization has one for their particular artifact, 18 in all, hidden somewhere in the game. A couple are easy to find, dropping from bosses and world quests or sold by vendors. Others, which have quickly become the focus of community attentions, are much more elusive.

For more on WoW, check our Legion review.

There are three that are particularly spiking interest. The most developed is the search for the Corrupted Ashbringer appearance, for Retribution Paladins. It’s similar in looks to the item of the same name that dropped from the Naxxramas dungeon way back in the original game. While nobody has managed to secure the appearance on live servers, an extremely convoluted process has been datamined. It’s detailed in this MMO-Champion threadand further explained on Wowhead, but essentially involves following the experiments players attempted when searching for the Ashbringer legendary item in vanilla WoW – over ten years ago, before it was even implemented.

Unfortunately, starting the quest chain properly involves reaching a certain level of artifact knowledge, an automated research process that you have to log in to start but otherwise takes five days per go. Based on people’s experiments on beta realms – where characters have existed for much longer, since testing started back in 2015 – it requires at least eleven levels for a portion of the chain to unlock. That’s a couple of months of wait at least. Those numbers may have changed, but that point in the chain still hasn’t triggered for anyone on live realms. Once they do, there’s phylacteries to find, rare slimes to kill and finally fishing to do before the skin is unlocked. 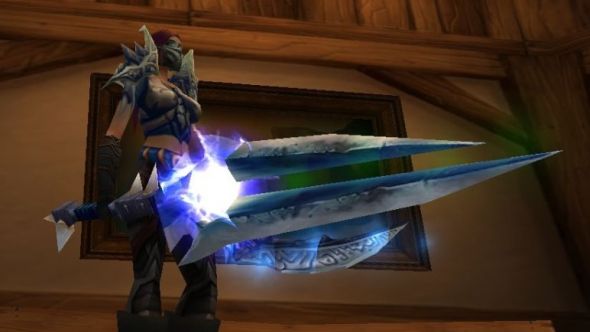 If that all seems ridiculous, players haven’t even worked out how to start the Outlaw Rogue quest that leads to a skin based on Thunderfury, another well-known vanilla WoW weapon. A comment on Wowhead is tracking all rumours of it, with current signs pointing to a boss in Vault of the Wardens, one of Legion’s max-level dungeons. However, it’s believed there will be a starting point that is yet to be discovered, likely involving old-world content in a similar way to Corrupted Ashbringer.

It’s worth noting that there’s also some debate as to when many of these hidden appearences will become available. There are some in the game now, but those that drop off raid bosses, naturally, aren’t accessible until those raids are available. It’s possible that starter quests might also be gated until that point – which is next week now, as the Legion release timeline goes – or otherwise hidden behind time factors in a similar way to the Corrupted Ashbringer chain.

Finally there’s the Arcane Mage and their Woolmancer’s Charge, which is generally assumed to be the most secretive of the lot. Datamining has lead to a number of steps being found, but again the start of it all remains shrouded. The dedicated mage forum at Altered Time has a long, winding thread about it, detailing the various polymorphing of neutral animals they believe is required. Some of the sheep also probably explode. Definitely a Blizzard game.

The hunts continue. My own hidden artifact appearance, a lovely Protection Warrior shield, was supposed to be simply found in a cave, but doesn’t seem to be spawning on live servers – the assumption is that this means it has its own quest. Hopefully, all will be revealed in the coming weeks, but Blizzard have at least confirmed that all of the quests are in-game, even if they involve raids, rated PvP or Mythic+ dungeons to be added next week.