A World of Warcraft player has managed to beat the Ny’alotha raid’s Prophet Skitra fight while using a piano in place of a mouse and keyboard. You’d think doing that sort of thing would make them a hindrance to their squad, but they out healed other members of the team. A real key player, indeed.

The keybindings look absolutely mental, too. The A and D buttons are on two keys to the left of the player, while W and D are below them on some floor pedals – my head hurts just thinking of pulling that off. The rest of the keys the WoW raider uses are primarily grouped together across several piano keys to their left and right. The player has also posted their logs if you want to see how their performance panned out.

This isn’t Pzl’s only musical endeavour in World of Warcraft, either. Over the past week, they’ve tackled the same boss using an electronic drum kit, and others using a mouse and a light switch, and Discord reactions on their phone (thanks, Icy Veins).

You can catch the video of Pzl tackling Prophet Skitra down below: 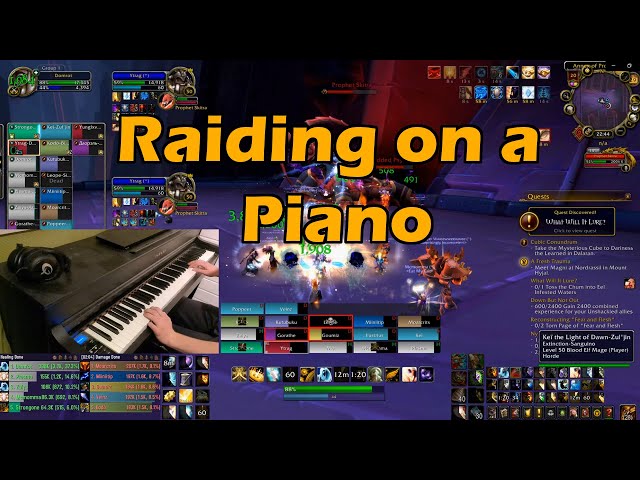 The World of Warcraft Shadowlands release date isn’t until later this month, but heck, this sure is a creative way to keep yourself entertained.