World of Warcraft’s first raid of the new Shadowlands expansion is a creative test of players’ abilities in a gorgeous setting. Its boss fights are innovative, its difficulty among the most challenging of any raid in years, and its story, dialogue, art, and soundtrack all combine to make it one of the best raids that Blizzard has ever made.

The innovative mechanics, detailed environments, enjoyable boss difficulties, and the overall feel of the castle combine to create a fantastic first experience for Shadowlands raiders. That’s rare; usually the first raid of an expansion is a bit lacklustre compared to its successors. Castle Nathria has set the bar high for all Shadowlands raids to follow.

Nathria is located in the Gothic zone of Revendreth, the place where souls are sent to be punished – and redeemed – for their sins in Shadowlands’ afterlife-themed storyline. For a full overview of the raid, including how to get there and a breakdown of each of the bosses, see our WoW hadowlands: Castle Nathria raid guide. Nathria is the home of Sire Denathrius, the tyrannical leader of the Venthyr, who has been stealing anima life force from souls to feed to the evil Jailer in the Maw.

So many confusing mechanics might be overwhelming, but it all hangs together amazingly well

The themes and motifs of Revendreth (a gorgeous zone and my favourite in the expansion) are scattered throughout the castle. Mirrors powered by blood-red anima whisk you from one part of the castle to the next, making recovering from wipes a reasonably simple process. The castle itself is laid out in a way that ordinary humans can follow, not just in the way that makes the most sense for the placement of Narthia’s ten boss fights. The decor and the NPCs, both attackable and not, serve to make Narthia feel like a real, living location, which helps keep players invested in the narrative as it unfolds throughout the castle.

The lighting effects – most notably a cloud of darkness literally slashed apart by giant blood-red swords during the final boss fight, and more subtly in stained glass and other room designs – create a glorious ambiance. And the score is delightful, particularly in the dance-themed Council of Blood fight. 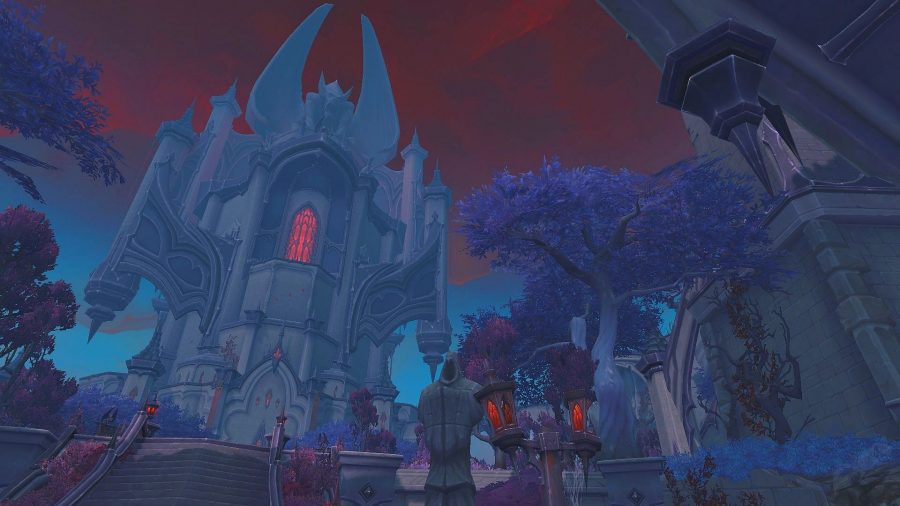 A new level of difficulty

Castle Nathria has challenged even the world’s best guilds, requiring more time to defeat than previous raid tiers in the last few expansions. Some of that is due to the complexity and difficulty of the fights themselves, but some is also attributable to Blizzard’s new loot-drip philosophy in Shadowlands. It’s much more stingy than previous expansions, but that’s because it’s intended to make gear that drops from current content more rewarding.

When players walked into Battle for Azeroth’s raids, they were often fully geared after tackling Mythic Plus dungeons, Warfronts, and world bosses, with the result that early raid difficulties may not have provided any upgrades. With this expansion, Blizzard strove to undo all that, reducing the item level and quantity of rewards from other sources and thereby making Castle Nathria feel much more difficult to complete.

Even the world’s top guilds took a couple of days to clear Heroic difficulty, and Complexity Limit recently revealed that their world first clear of Mythic – which took them more than a week – cost them almost 331 million gold for bind-on-equip items, consumables, and other preparations. 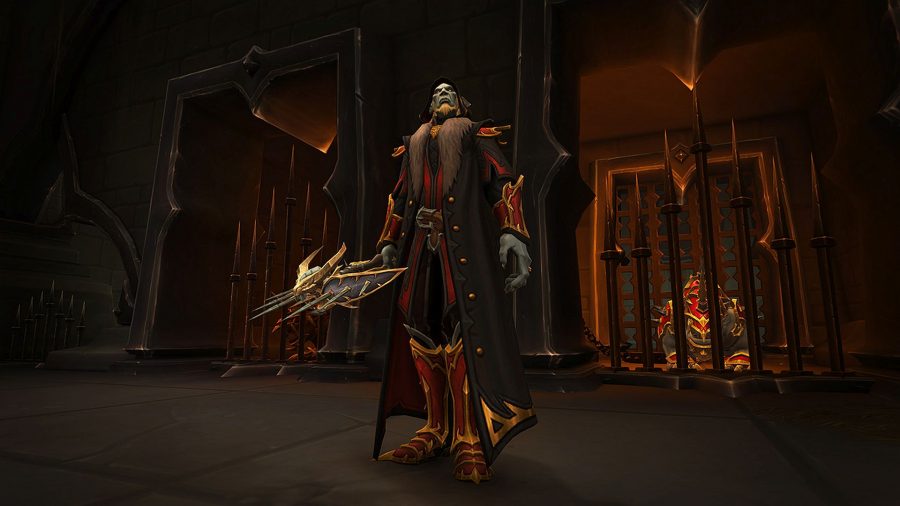 Unique bosses that all fit the theme

The complex mechanics of each fight are built around the bosses themselves and echo the larger themes in the game world. In that Council of Blood fight, for example, the lush dance hall includes dancers spinning in the air overhead and sometimes amongst the players themselves. Squat dredger servants complicate your fighting by throwing food. At regular intervals, the bosses retire to their safe perch, forcing you to participate in a dance with all the servants on the floor. Do your simple steps correctly and you get a buff. Two left feet can kill you.

Final boss fights are supposed to be tough, and Sire Denathius is no exception

Even the simplest, Patchwerk-style kill-this-boss-fast fight, Sludgefist, includes some unique mechanics. You are literally chained to another player; separation kills you both. The boss will charge, and if baited correctly, break the pillars supporting the ceiling, giving you a window in which you’ll deal extra damage and creating a kind of soft enrage that will end the fight when you run out of things to point the boss at. And that’s the simplest fight in the instance.

So many confusing mechanics might be overwhelming, as every fight has multiple phases with multiple abilities to watch out for, but it all hangs together amazingly well. The Huntsman encounter has three gargon pets, each of which has mechanics that might have sufficed for a whole encounter in previous raids – and that doesn’t count his own abilities. But one phase flows smoothly into the next, making this a fight that works equally well on Mythic or Looking for Raid difficulties. 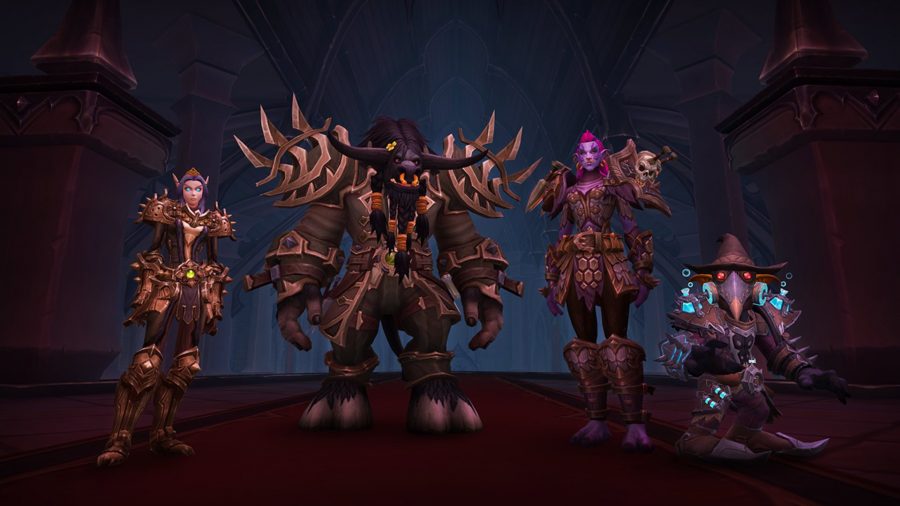 Final bosses are supposed to be complicated, and Sire Denathius is no exception. You’ll fight through several floors of his tower, using mirrors to teleport away, then back again, to avoid instant-kill mechanics. His sentient sword, Remornia, will create multiple copies of itself and attempt to cut you down. This encounter plays with space, both filled (so many red lines from the sword!) and empty – some adds are on ranged platforms, where only casters and hunters can reach them, and a knockback can send you hurtling into the open air to fall to your death.

Denathrius himself is nasty. At once refined and brutish, he holds nothing back in his efforts to take down the raid. I found him, along with the bosses along the way to reach him, at once intensely satisfying to actually beat, and difficult enough to keep me constantly engaged in the action. Mythic difficulty didn’t launch appropriately tuned – it’s notable that this is the first expansion that I remember in which the majority of changes to Nathria before and during the world-first race were buffs, not nerfs – but Normal and Heroic are truly memorable challenges for players at those levels.

Some extra help: The best WoW addons in 2020

With this raid, Blizzard slots a new classic into its lengthy raid discography. If you’re yet to hop into the latest expansion then check out our WoW Shadowlands review to see if it’s your bag, but rest assured that its first raid is a shockingly good start to its suite of large-group encounters. Only the tiniest bit of balancing issues during Mythic and Heroic difficulty progression give anything much to criticise. Nathria’s gorgeous aesthetic, creative mechanics, and unique combination of player challenges set it apart.