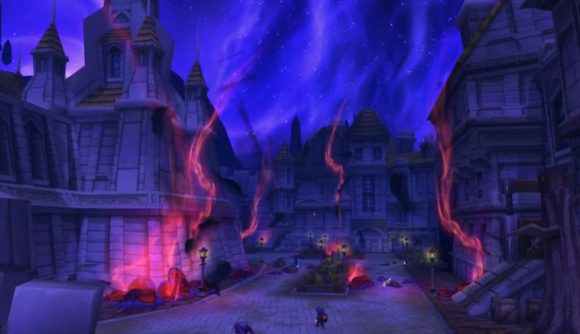 Blizzard has confirmed that some of the World of Warcraft features from recent updates will still be accessible when the next major expansion goes live. Horrific Visions, Island Expeditions, and Warfronts will all still be playable even after the Shadowlands release date occurs.

Horrific Visions were a facet of WoW patch 8.3. They’re alternate reality missions showing Azeroth if N’zoth had won, redecorating everywhere as appropriate, and can be done solo or with groups of up to five. Island Expeditions and Warfronts came in with Battle of Azeroth – the former are small 3v3 competitive quests to gather the most amount of Azerite, while the latter are bigger team skirmishes between Alliance and Horde, once side defending an area from hostile takeover.

Players have been exploring the WoW: Shadowlands beta, which is currently underway, and some interesting tidbits have been uncovered, including a Witcher 3 easter egg. A hands-on preview back in November last year left us feeling optimistic about where the expansion is taking World of Warcraft conceptually. Notable features include that it’ll bring Xbox Adaptive Controller functionality to the lands of Azeroth.

We don’t yet have a definitive release date for Shadlowlands, but you can sign up for the beta here, and we have a list of the best WoW addons if you’re looking for more ways to shake-up your fantasy role-playing.