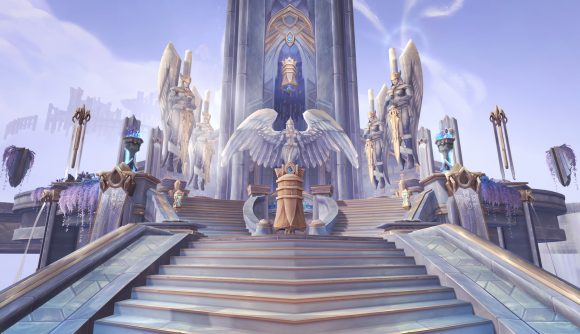 You can find him in the Cathedral of Light next to a pillar in purple and black garb. Typically, Rogue trainers hang around in the Old Town, but the Cathedral feels like a better fit as that’s where some WoW players gather to remember the streamer. Reckful’s NPC counterpart currently has some voice lines, too. If you chat to him he’ll tell you that he doesn’t train assasination rogues. You also have the option to tell him that it was good to see him again. Reckful’s NPC doesn’t have a reply for that currently, but it’s a very sweet addition nonetheless.

As Wowhead notes, Bernstein was a huge part of the WoW community and boasted an impressive 3000 rating in PvP. He also helped popularise streaming the MMORPG on Twitch. Plenty remember him for encouraging others to be open about their mental health. One Overwatch turned Valorant pro we spoke to a few years back mentioned Reckful as a personal inspiration for that very reason.

If you or someone you know is experiencing suicidal thoughts, you can dial 800-273-8255 to reach the Suicide Prevention Hotline in the USA. If you’re in the UK, you can find the Samaritans on 116-123.

You can find further resources for the US here, the UK here, and the rest of the world here.