Wondering which of the new WoW Shadowlands Covenants to choose? World of Warcraft’s new expansion, Shadowlands, asks you to make a significant choice when you hit the new maximum level of 60. As you’re leveling from 50-60, you’ll experience four zones ruled by four factions, or Covenants, who provide their devotees with a different Sanctum home base; different abilities; bonus goodies; and different followers or Soulbinds, whose mini-talent trees affect your gameplay.

As you level, you’ll get a taste of the special abilities provided by each, and experience the Covenant’s zone, home base, and the followers that will become your Soulbinds later. By the time you reach level 60 in Shadowlands, you’ll have a good idea of what each Covenant looks and feels like, and at that point, you’ll be asked to make a choice to follow just one. Any alternate characters you create later will be able to swear allegiance to a Covenant from the start at level 50.

Deciding which Shadowlands Covenant you’re going to pursue can be tough. You’ll put significant effort into the faction you choose, leveling up your reputation with them via Renown, pouring Anima and retrieved souls into their coffers, and generally powering up your own abilities as you contribute to their operations. You can also redirect some of that Anima to open up additional quests or activities in your chosen faction’s zone. And Covenant Callings, Shadowlands’ answer to emissaries, offer time-gated meta-quests specific to that Covenant with significant rewards.

Why choosing the right Covenant matters

As a result, changing WoW Covenants poses some challenges, since you have to make up all that work. There are some catch-up mechanisms in place – there are weekly limits to how much you can move these things along, and if you’re behind, you can keep doing those things without limit until you catch up – but it’s still a slog. That makes choosing a Covenant important to get right the first time.

What you get for the Covenant choice you make

Each covenant offers one signature ability, usable by all players, and one ability that is specific to your character’s class. In addition, each offers a really nicely designed suit of armor (including three truly fancy cloaks, showing off Shadowlands’ new architectural cloak designs) that only their followers can wear. Each includes a mount and battle pet.

Each Covenant Sanctum or hub includes a special activity or minigame specific to that faction. Covenants offer max-level questlines to follow, special abilities in the dungeons located in their zone, and ways to teleport around the zone. And each offers different heroes to interact with and Soulbinds, followers who give you talents, to collect.

If you’re questing with another person, there is some overlap. The weekly jaunts to collect anima and souls are common to all Covenants, and can be done together. World quests will continue to be available across all four zones, and each Covenant specifically asks you to venture to another’s zone to help their allies. And dungeon content is the same for all characters, so no worries there.

Massively multiplayer: the best MMOs on PC in 2020

Here are the four WoW Shadowlands covenants, in alphabetical order — which is also the order you’ll see them in as you level. We’ve included the information that pertains to all players; keep in mind that in addition, each of the 12 World of Warcraft classes will have signature abilities specific to them for each Covenant.

The four WoW Shadowlands covenants are: 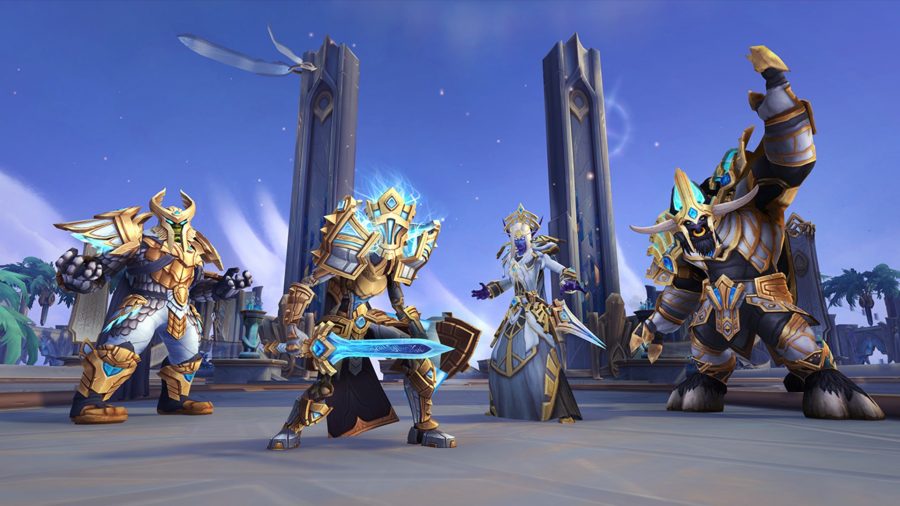 Armor design: Wings and halos. Kyrian armor is gold, blue and white, with a cloak design that looks like a ring, then a halo, then a pair of wings. Plate and leather armor evokes the giant constructs in the zone; mail includes elements of the owl-like stewards that help players; and the cloth set is straight-up angelic.
Signature ability: Summon Steward, which calls an owl friend to you to deliver a Phial of Serenity once every 5 minutes. Phials restore 20 percent of your health and remove all Curse, Disease, Poison and Bleed effects. Once a day, you can also receive a random additional useful effect, including giving Phials to your allies, increased movement speed, increasing your stats, reducing cooldowns and the like.
Sanctum: Elysian Hold, a collection of floating platforms in the zone of Bastion.
Famous person you’ll find there: Uther, the paladin killed by Arthas (revealed recently to have cast Arthas’ soul into the Maw in the Shadowlands.)
Soulbinds: Pelagos, Kleia, Forgelite Prime Mikanikos
Dungeon bonuses in: The Necrotic Wake, Spires of Ascension
Special activity: The Path of Ascension, which pits your character (in the body of one of your Soulbinds) against previously defeated bosses for rewards. 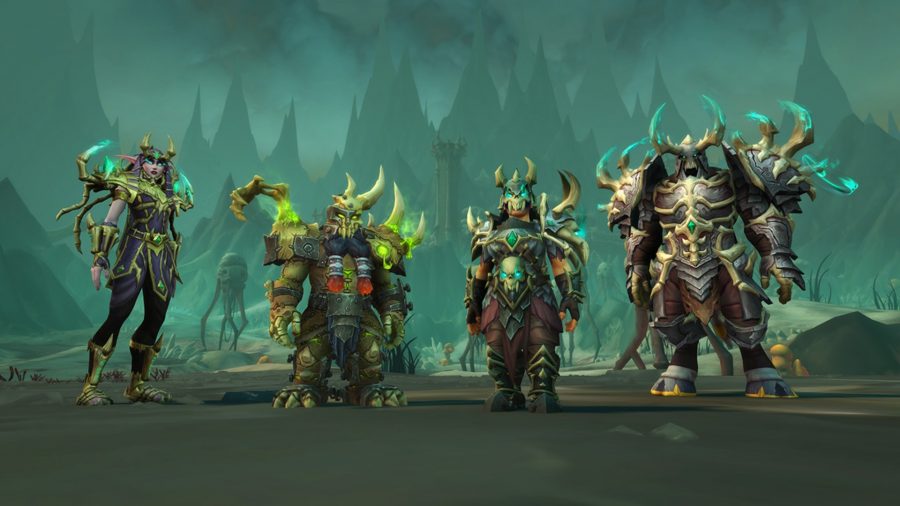 Armor design: Skulls. Necrolord cloaks include a spiky shield attached to your back, skeletal wings and a greenish bony crystal design. The plate set is a dramatic assortment of grey bones and blue-green flame; the mail, a single-shouldered design with a similar palette; leather, a more sickly green with a skull and claw-like spikes; and cloth, a spider-like assortment of skeletal tentacles. Give props to your edgy brothers, because the Necrolord art team knocked it out of the park.
Signature ability: Fleshcraft, a two-minute shield on a two-minute cooldown that absorbs damage of up to 20 percent of your maximum health (50 percent if you cast it over a corpse.)
Sanctum: Seat of the Primus, an undead-themed fortress in Maldraxxus.
Famous person you’ll find there: Draka, the mother of famous Warcraft orc leader, shaman and Warchief Thrall.
Soulbinds: Plague Deviser Marileth, Emeni, Bonesmith Heirmir
Dungeon bonuses in: Plaguefall, Theater of Pain
Special activity: The Abomination Factory, which lets you combine ingredients to create one of a number of helpful abominations that can provide a variety of benefits. 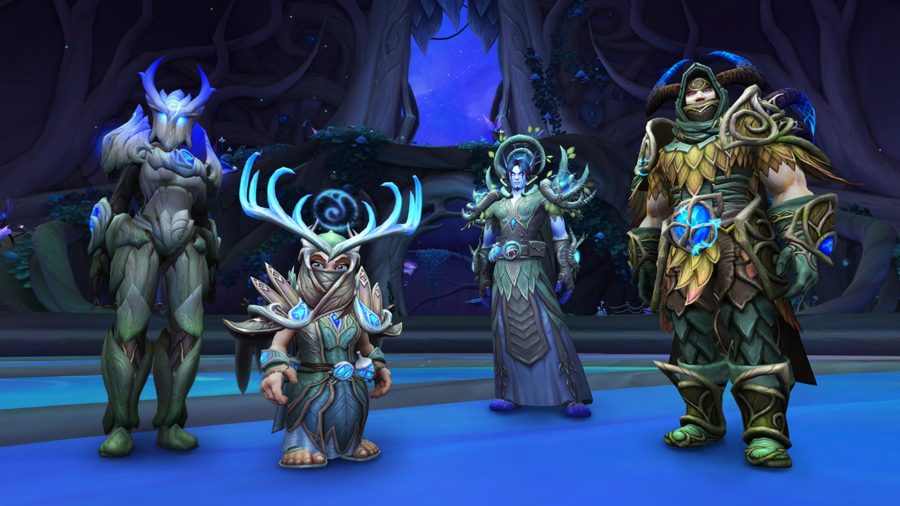 Armor design: Shiny wildlife. The cloaks include an ornate horn structure similar to the fancy deer in the zone, a blue crystal with butterflies, and a blue backpack-like glowing larvae with glowing little drops of the same color. The plate set is vaguely tree-like, in silver and purplish blue; the mail set is a solid, serviceable blue and dark-gold/brown chitin-like set; leather comes in robe and pants variants with an attractive druidic brown, tan and blue design; and the cloth does a good job of combining dragonfly and stag aesthetics.
Signature ability: Soulshape, which allows players to shapeshift into a glowing blue fox (other forms earnable later) and leap forward 15 yards, increasing movement speed by 50 percent. It lasts for 12 seconds, or forever in a rest area, and has a 90-second cooldown.
Sanctum: Heart of the Forest, a tree-themed twilight-hued hub in Ardenweald.
Famous person you’ll find there: Cenarius, the centaur-like druidic demigod whom players helped to purify in the Emerald Nightmare raid.
Soulbinds: Niya, Dreamweaver, Korayn
Dungeon bonuses in: De Other Side, Mists of Tirna Scithe
Special activity: The Queen’s Conservatory, a garden where you can raise and restore souls that will give you reward caches. 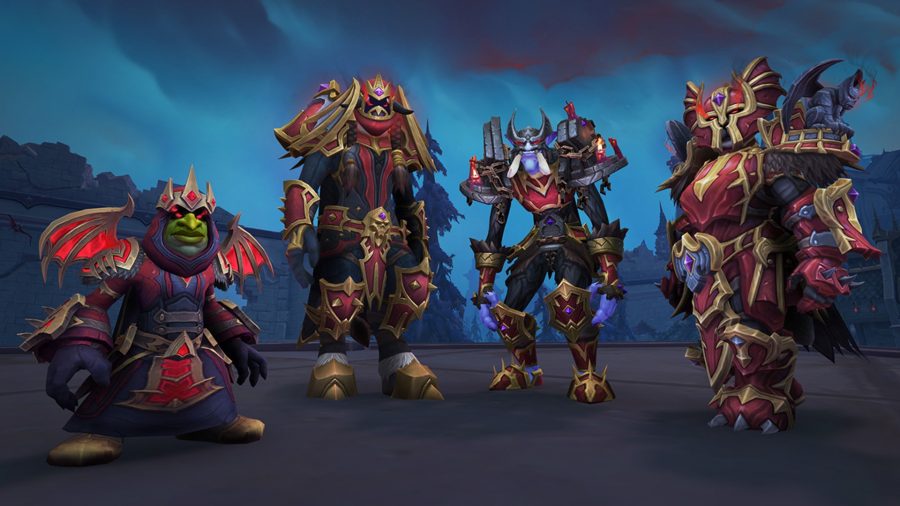 Armor design: Gothic vampires. Venthyr armor is blood-red, typically with swirly red misty effects. Your cloaks include a pair of red lanterns, a spray of gold and red blades, and an actual tombstone on your back. All four armor type sets are similar in appearance, with dark gold and blood red; even the cloth set includes the same pants and chestplate as the others, though you get a nifty set of mini vampire wings.
Signature ability: Door of Shadows, which allows players to cast a 1.5-second spell and teleport up to 35 yards away to a targeted location, on a 1-minute cooldown.
Sanctum: Sinfall, a Gothic castle in Revendreth.
Famous person you’ll find there: Former blood elf leader Kael’thas, the villain of the Tempest Keep raid and Magister’s Terrace dungeon. Apparently death itself was only a setback.
Soulbinds: Nadjia the Mistblade, General Draven, Theotar the Mad Duke
Dungeon bonuses in: Halls of Atonement, Sanguine Depths
Special activity: The Ember Court, a weekly party in which you set up the very best food and entertainment, keep your guests happy, and reap the rewards.

Those are the four Shadowlands covenants you’ll need to choose from in WoW Shadowlands. If you need some help crafting legendary items or want to know how to obtain the Sinrunner Blanchy mount, we’ve got you covered.