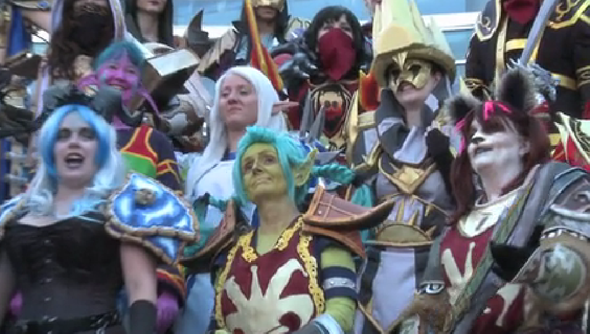 Blizzard’s film, World of Warcraft: Looking for Group, looks back over the ten years of their MMO’s history and it’s being screened for the first time this weekend. There’s another film, though, one that looks at a very specific role World of Warcraft has played for some of its players: cancer therapy.

WoW MoM documents how Terry Bolt uses World of Warcraft to cope with the many difficulties of her illness, both those physical and emotional.

Shortly after being diagnosed with Neuroendocrine Tumors in 2010, Terry began playing World of Warcraft and making friends through the game who she could speak to about her illness. Often she found there were things she could talk about with them that she couldn’t with her own family because her family would worry.

The documentary’s being directed by Terry’s daughter, comedian Andie Bolt. “Once I started looking into gaming as a way to heal there was too much story there to tell,” says Andie says in the film’s press release. “It’s not just a bunch of dudes in their parent’s basements; it’s grandmas on their ranches, terminal children in their hospital beds, or wives who just lost their husbands.”

The principal filming work’s already been completed but Andie’s turned to Kickstarter to raise the funds to have someone edit the full feature release of the film.

Besides exploring the story of how Terry first began playing World of Warcraft and what it provided her as a community, it covers how others use the game, too. Parents who play with their diagnosed children, friends running tournaments to raise treatment money for someone suffering from stomach cancer, and widowers who found the game to deal with the death of their partners.

If you want to see this documentary get made then you should have a read through WoW Mom’s Kickstarter page.