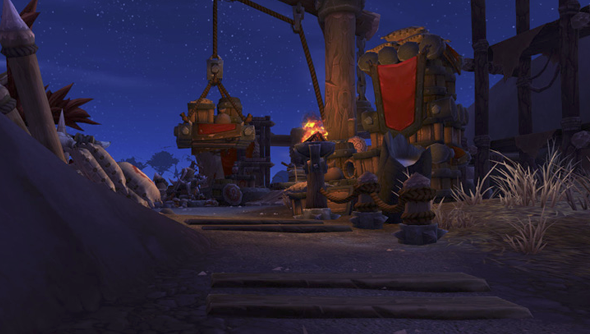 Blizzard’s been working on making the positively ancient World of Warcraft look better for its next patch, 6.1. The update will bring back anti-aliasing of the MSAA and SSAA variety and textures will all look considerably more detailed thanks to Nvidia’s HBAO+.

If none of that made sense then, suffice to say, a wizard did it.

Nvidia’s HBAO+ is a kind of screen space ambient occlusion. What it does is analyse the geometry of the models being drawn on screen and adds shadows to them by detecting a model’s normal map. Essentially, it’s allowed Blizzard to apply much richer shadows to World of Warcraft. You’ll need to be running a DirectX 11 card to use HBAO+, as well as meeting the recommended system requirements. Can you run it? Compare your setup against the World of Warcraft system requirements.

Click here to see a comparison between vanilla Warcraft and HBAO+ Warcraft.

6.1 will also see the return of multisample anti-aliasing and the introduction of supersample anti-aliasing. Anti-aliasing turns harsh lines on geometry into soft edges, giving game worlds a much more realistic, and less clinical look. MSAA and SSAA will both be available to DirectX 11 card owners. Blizzard say they’ll be “providing the widest variety of anti-aliasing options we’ve ever had available, ranging from performance-optimal to performance-crushing.”

Finally, Blizzard are improving lighting systems across the board. They’re introducing per-pixel deferred point lights. These create “realistic lighting from sources like campfires and torches, and illuminates the world in a more realistic way.” Again, it’s down to the quality of your card but the better your card the more luscious the effect in-game.

You can see more comparison shots in Blizzard’s blog post.

The 6.1 patch is already live on the test realm but no official release date’s been announced.