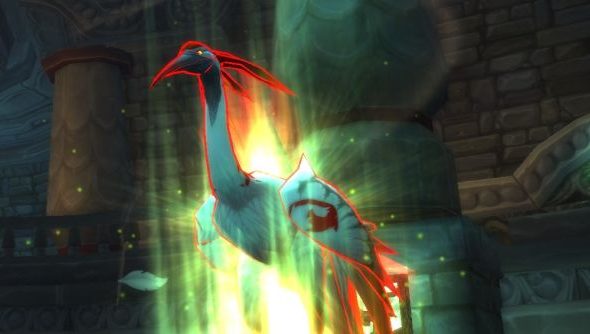 What if you made a World of Warcraft expansion with no levelling component? I got to sit down with Luis Garraga, a Lead Designer on WoW, in the dying hours of the final day of Blizzcon. We chatted about a lot of things, including the surprising tiredness that comes from an entire day of interviews, but one interesting detail popped up about a possible alternate development path the upcoming Legion, could have taken.

World of Warcraft makes our list of the best PC games ever.

When World of Warcraft finally reached a level cap of 100, I personally had an inkling that it might stay there for longer than usual. There is something so satisfying about it, the first time WoW’s endpoint has actually felt that way since the original 60. While it didn’t look like the game would be shutting down any time soon, I thought maybe Blizzard would put in a different form of progression to replace it. When the expansion was eventually revealed to not only have another 10 level bump but the weapon-improving artifact system that fit that bill, I figured it was worth asking what had happened.

“We started exploring what it would look like if you didn’t level up.” said Luis, clarifying it’s one of several ideas they think about at the start of every expansion, but it went further with Legion, “If we were to do it, this would be the expansion, because we give you a very analogous mechanic with artifacts. But something didn’t feel right about losing that moment.

“We’re happy to see a surge of players whenever we put out a new expansion, for some players that is what they do, they just want to see that levelling content. [In the same way that] some people might play StarCraft or Call of Duty [for the campaign]. So for them it’s the big draw, it’s not like levelling is a hindrance or something. If that is your primary draw, we really didn’t have a strong enough reason to take it away, a nice round number isn’t enough.”

However, something good did come of it: level scaling for all but one of the new zones in the Broken Isles. This means everyone’s path through the continent will be different until they come to the final, max-level zone. It includes dungeons too, vitally since they’re taking a much larger role in the levelling experience this time around. Best of all, it allows you to join friends in levelling no matter how far ahead of you they get.

“The level scaling grew out of that exercise. What we liked about it was, oh man, all the zones stay relevant. So we looked and asked what would it take to scale stuff.” Luis remembered, pointing out that Blizzard had already solved many of the issues that might come with mass level scaling. “We’ve got stuff like timewalking now. A way to describe it would be we had all these Ferrari pieces lying around, so why don’t we just build a Ferrari?”