Apparently, there’s a massive battle stirring in World of Warcraft, and soon the whole of Azeroth will be pulled into the grips of war. But while that drama unfolds in the background, my mighty and brave blood elf rogue – Jondosh – is running around killing cute lynx kittens on Sunstrider Isle.

Why? Well, when many of you were grinding to that magical level 110, I still hadn’t got around to playing World of Warcraft. Now, as my adventure begins- spurred on by the arrival of the new expansion, Battle for Azeroth – I find myself able to investigate the answer to a certain question: what’s it like to start World of Warcraft for the first time these days?

The game’s introduction isn’t really one for explanation. It shows me a cinematic that builds up the Battle of Azeroth as a way of giving me an insight into the overarching story. It seems simple enough. The folks being led by the gorgeous golden-haired knight – who I imagine is in a boyband on the weekends – are obviously the heroes. The others captained by an evil-looking witch with an army of jacked-up orcs, are clearly the villains. Right?

Maybe not. As the cinematic draws to a close, both leaders rallying their armies, with cries of “For the Horde” and “For the Alliance” ringing out, it casts doubt in my mind as to whether the blanket terms of good and evil hold any weight in World of Warcraft.

Due to this blurring of hero and villain, I don’t feel any qualms about joining the Horde, creating a blood elf with a focus on stealth and swift attacks. At least, I think that’s what the rogue class is all about. To be honest, the game throws too much decision making at first-time players early on. The character creator is nothing new, but picking a race and class in a game that offers so much diversity after 14 years of worldbuilding is daunting. Is it best to be an overgrown cow or a malnourished zombie? There’s no telling what the differences are unless you’re already familiar with Warcraft’s races. Ultimately, I’m forced to make snap decisions based on what I know about the classes from other RPGs in a bid to start adventuring as soon as possible.

players show up, leapfrog me, and then bugger off

Right then, World of Warcraft finally starts up with the camera panning across the Sunstrider Isles as lore is spat into my face. Wiping away the residue, none the wiser as to what’s going on, I at last have control over Jondosh. The starter quests are nothing I haven’t seen before: go here and kill something, then go there and kill something, and then come back here and kill some wild cats. Eventually, I break out of the starter quest cycle and run for the island’s shore to swim away in hopes of uncovering the game’s secrets quicker. 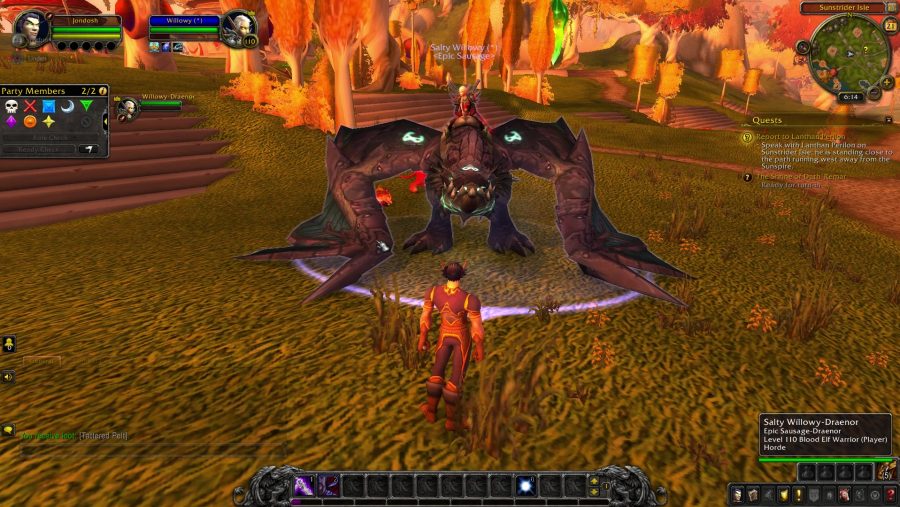 I open up the map thinking I can swim for a good ten minutes and arrive somewhere that’s actually worth exploring. Imagine my surprise, then, when the map doesn’t show just one large island but, instead, a gigantic continent – one of three gigantic continents, in fact. With so much to see, so far to go, and the threat of drowning becoming ever more real as I reach deeper waters, I turn around and head back to my homeland with my tail securely between my legs. I’m at a loss, sitting on the shore as other players occasionally show up, leapfrog me, and then bugger off again. With little more than a South Park episode being my knowledge of World of Warcraft, the prospect of starting a bonafide adventure is, unfortunately, shrinking. But hang about – what’s this? A fellow blood elf has rocked up on a motorbike, an old-hand at the game, offering to show me around.

Dalaran is a single city-state ruled by archmagi. The leaders used their magical powers to lift the city from its spot by the Lordamere Lake - leaving behind a crater - to have it float over the Crystalsong Forest to attack the armies of the Lich King.

Within minutes of joining my apprentice I see that World of Warcraft has opened up to me. After showing off her catalogue of mounts – from strange rocket jets to terrifying flying lizards – my new blood elf friend takes me on a tour of worthwhile locations in Azeroth. We go to the bleak city of Brill, which is lit only by green gunk, and is filled with armies of undead that march through the town. From there we jump into a portal conjured by my friend (mages are pretty handy, it turns out) and arrive in the Undercity. The twisting streets create a maze of dark cobblestone streets. I get to see Sylvanas, my one true leader, as she holds court in one of the buildings, but she’s too busy to speak to me – understandable, I’m but a lowly grunt.

Another portal later and we’re in a floating city by the name of Dalaran, apparently a new home to the Horde and one that better shows how much the game’s community is still thriving. Players litter the streets, each one having earned their way into the city through of years of adventuring, an idea that seemed so alien to me and my game-commitment issues. Wandering through the city, I realise I am but a tourist inside World of Warcraft, someone who hasn’t played through the rich history of one of the biggest games in existence. How long would it take to become like one of the population – hours, weeks, months? Probably longer. 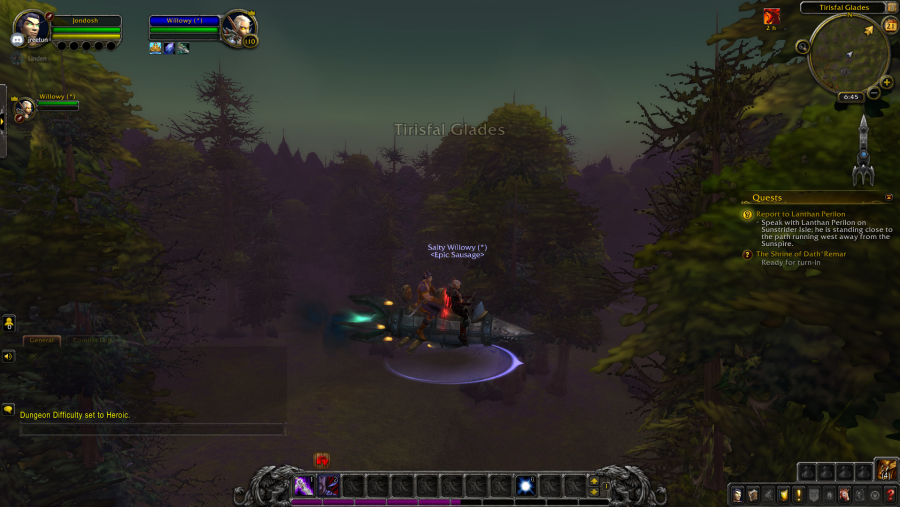 Coming to World of Warcraft as a first time player now feels like getting to a party a little too late. The excitement is diluted, seasoned players seem docile, and the world appears at ease. Though, perhaps the biggest problem is that the game has so much to offer new players, so much that it becomes near impossible to know where to start. Being shown around a small part of the game was a great way for me to see what’s ahead if I stick with it, but it can feel like you’re being rushed to get into the meat of the game, unable to enjoy the full experience.

Blizzard offers new players a shortcut to this end, allowing us to start certain races at level 55, but it feels like piggybacking your way into the game rather than earning your way in. You can skip the grind and snatch at World of Warcraft’s greatest moments if you wish but you’ll probably never quite fit in with those long-time players. You can earn experience but you have to live through history to be a part of it.