In the past few weeks, World of Warcraft has shot up Twitch’s viewing ranks. Even with a new expansion out, that’s strange, as Warcraft has never been known as a ‘stream friendly’ game. It’s esoteric in nature, appealing mainly to an audience that’s willing to put the time in to keep up with its rich lore and monthly subscription. With its many spells, cooldowns, and user-defined macros, it can be hard for casual viewers to understand what’s happening. How and why has World of Warcraft suddenly gained this dedicated Twitch audience?

According to SullyGnome.com, when comparing peak viewer counts of all Twitch streams in the past 180 days, Warcraft places 55th on the list. When limited to the past two weeks, it rockets up to eighth. Its average viewer count over the past fortnight is near 34,000. This time frame is significant, as July 17 saw the release of a meta-shifting pre-patch for World of Warcraft’s latest expansion, Battle for Azeroth. It stands to reason that people would want to watch the new content before the expansion dropped on August 14.

But in September 2016, just after World of Warcraft: Legion launched, that average view count was around 38,000. Just before Battle for Azeroth arrived, Warcraft had almost met those post-expansion numbers,and the post-launch view counts are decimating previous records, with a peak of nearly 600,000 viewers on the day Battle for Azeroth released. 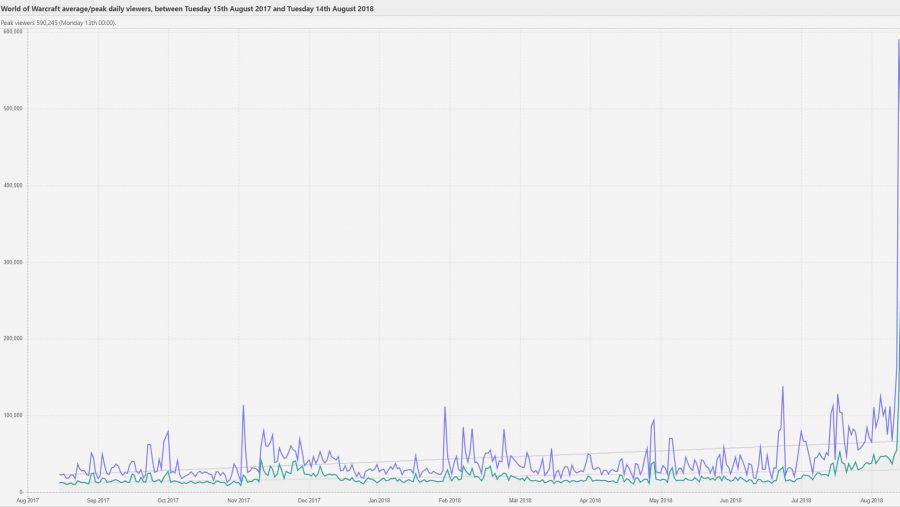 The best person to speak about such a shift in popularity would be Asmongold. Excluding variety streamers and the official Warcraft account, Asmongold is the top World of Warcraft streamer. He’s gained around 50,000 new followers in the past two weeks.

On pre-patch day, 51,000 people tuned in just to hear him talk over World of Warcraft’s login screen while the servers crashed. For reference, a current, English-speaking, Dota 2 tournament stream peaked at 52,000 viewers this week. “I didn’t expect that to happen,” Asmongold tells me. “That’s the funniest thing. The highest view count I’ve ever had, and I wasn’t even playing the game.”

the reason people focus on the game is that community aspect, that social aspect

There’s one question floating in the air, though: were those increased numbers due to the expansion’s upcoming launch? Or does the Twitch audience just really want to watch Warcraft in any shape – even if it means sitting through a server crash?

“That’s such a big question. I’d actually love to answer it,” Asmongold says. “Number one: I feel that I’ve seen more growth than anybody else has. The success of my stream and other people’s streams has given a lot of people hope for the [WoW section], and also broken the stereotype that World of Warcraft is a dead game.”

Of course, the most obvious reason World of Warcraft is being brought to the forefront on Twitch is Battle for Azeroth. “But another big reason,” Asmongold adds, “is a paradigm shift in content. A paradigm shift in mentality, in enjoyment of the game. [Streamers are] seeing what other people have done [with their streams] and seeing the WoW section growing and doing well. I think that makes other streamers more willing and less apprehensive to move into the WoW section.”

For Asmongold, this means building a community by having a close-knit friendship with his chat. He interacts with his viewers during intense raid moments and even helps some of them complete high-level content in World of Warcraft. Most of all, he enjoys creating funny moments for people to discuss.

“What I’ve always said about WoW,” he begins, “is that the reason people focus on the game is that community aspect, that social aspect. So, I built that into my stream. I think that’s another big reason why I’ve been successful.”

Drustvar is one of the new zones added with Battle for Azeroth. It's a shadowy land of witches, curses, and superstition that clearly takes cues from The Witcher 3’s depiction of Slavic-style folklore.

Battle for Azeroth review - day one

But Asmongold isn’t entirely sure how many of his new viewers were born from Battle for Azeroth’s hype, and how many came from natural curiosity. This starts a new train of thought: are these viewers even coming for WoW at all? Do they just like Asmongold? “I think that it’s a little bit of both,” Asmongold reckons. That’s backed up by not only the growth of his own Twitch channel in recent weeks but the surge or viewers watching World of Warcraft on Twitch since Battle for Azeroth launched.

Asmongold adds to this that growth for any streamer in a particular section is growth for the section as a whole. For example, if new viewers click into the World of Warcraft category for a tournament on Blizzard’s official stream, many may see (and later remember to view) Asmongold’s stream. That logic can apply in any situation – even replacing ‘official stream’ with ‘Asmongold’. 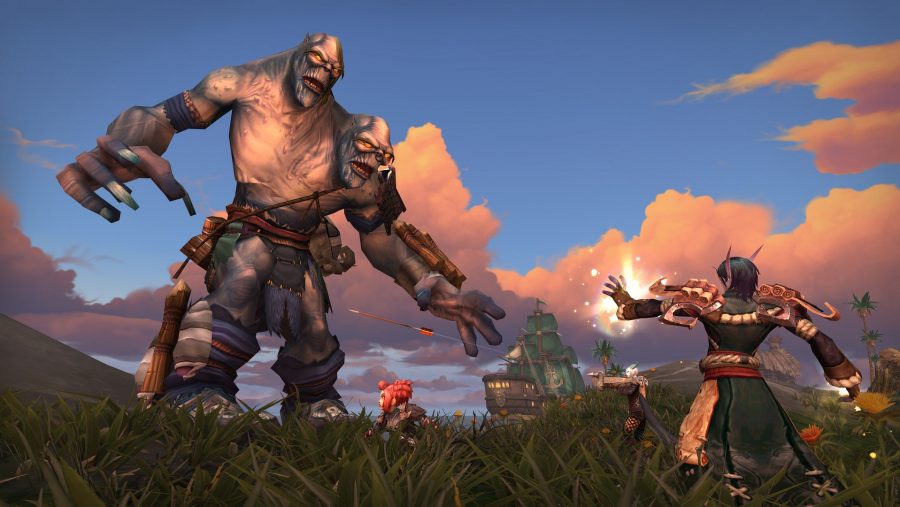 “Whenever I do well then go offline, a lot of other people in the WoW section get extra viewers. Again, that’s more about building a community and building up other people so you can create content together.”

This popularity does feel different compared to Legion’s launch, though. In Asmongold’s eyes, a large portion of the views may be here to say. “The difference,” he says, “is that there’s a community that’s being fostered and being grown organically inside of the section.

“I think that we’re going to see a much smaller drop-off this time [than Legion’s launch] because of how much work so many people have put in developing their streams and creating this type of a community. In my opinion, that is unprecedented.”

But, even with viewer retention, such growth can’t continue forever. “There will always be a drop-off after the expansion is out,” Asmongold states. “That’s just what’s going to happen. My focus is how can I bring those people to the dark side of watching WoW every fuckin’ day?”