Update March 30, 2017: Following a negative backlash to an unannounced change in WoW 7.2, Blizzard have further tweaked how monsters scale with equipment after level 110.

Before 7.2 monsters scaled with your level, but this change has many players worrying that equipment now means nothing. Blizzard have stepped in and dialled it back a bit.

This is just one of many huge changes in Azeroth of late. Catch up on the rest with our guide to World of Warcraft patch 7.2. We’ve also chatted to Blizzard about it.

To start off, damage done by mobs will now not scale up because of your high-end equipment. The scaling change was supposed to stop high-level players thoughtlessly killing everything, it wasn’t supposed to make them feel vulnerable, so mobs now do the same damage they always did before.

Additionally, enemy health doesn’t scale up quite as drastically, as it shouldn’t be a slog for elite players. Elsewhere, they’re looking at fixing it so enemies don’t immediately scale down when you rip off your breastplate. Here’s the post detailing it all.

Interestingly, it turns out this scaling has been live in the PTR since January, but it wasn’t until it went live that people began to speak up negatively about it.

Original Story March 29, 2017: WoW game director Ion ‘Watcher’ Hazzikostas has just confirmed the change on the WoW forums, and he’s had to do so because it wasn’t detailed in the patch notes and had to be discovered by a player. It’s fair to say the WoW community is a little browned off about both of these things.

Posting on Reddit, Jegethy says he found the change when adventuring with three other players with different item levels. They each saw different health values for normal creatures, rares, and elites. “You can confirm this yourself,” he says, in his original post on the WoW forums. “Target a mob at [level] 110 and remove a piece of gear. Its health will immediately drop.”

The responses to Jegethy’s two threads are almost universally negative. On Reddit, reverendball sayshe “nearly got three-shot by a non-elite shark off the coast of the Broken Shore” despite an item level of 907, and that he doubts the change is intentional. “What’s the point of power (gear) progression if the monsters scale with you?” says Brogas,echoing the sentiments of many on the WoW forums. 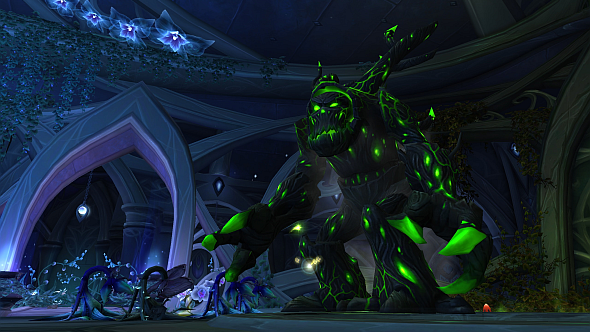 Hazzikostas answers these concerns in his response, beginning with a reassurance that “power progression is an essential part of the WoW endgame, and the last thing we want is to undermine that… We absolutely want you to feel overpowered as you return to steamroll content that was once challenging.

“But there’s a threshold beyond which the game’s core mechanics start to break down. When someone trying to wind up a 2.5 sec cast can’t get a nuke off against a quest target before another player charges in and one-shots it, that feels broken. And even for the Mythic-geared bringer of death and destruction, when everything dies nearly instantly, you spend more time looting corpses than you do making them. You spend an order of magnitude longer traveling to a quest location than you do killing the quest target. You stop using your core class abilities and instead focus on spamming instants to tap mobs as quickly as possible before they die.

“Our goal is basically to safeguard against that degenerate extreme.”

Hazzikostas admits that, based on player feedback, they may have got the numbers wrong, but the change to power scaling isa deliberate one, intended to“smooth out [the] progression curve”against world monsters to avoid the problems he mentions. So don’t expect it to be walked back, but do expect some tuning: “The scaling may be too steep, and the fact that unequipping a piece of gear can ever be helpful is a bug in the system. We’ll be looking into making changes to correct this in the very near future.”

Hazzikostas wraps up with “the natural question” of why the change wasn’t in the patch notes. “It was not to be deceptive,” he says, but Blizzard wanted players to “first experience the change organically. Your feedback and reactions and first impressions of the system are more useful in this particular case when they are not skewed by the experience of logging in and actively trying to spot the differences. Thank you for that, and I look forward to continued discussion.”