Castle Nathria is the first, ten boss raid in the brand-new World of Warcraft: Shadowlands expansion. It offers a blood-drenched setting in the zone of Revendreth. One very well-known Warcraft villain makes an appearance, as do a satisfying pile of new mechanics for players to navigate – sometimes using long-range teleport portals.

Castle Nathria is located in the Revendreth zone, home of the Venthyr. It’s a huge spire in the center of the zone. The raid is closest to the Menagerie of the Master flight point, but it’s a bit easier to get there from Charred Ramparts, as you can just run through the hole in the wall where the giant Crushfoot hangs out and head straight northeast to the instance, dodging a few monsters on the way.

Nathria opens this week, and we’ve got all the details you need to find the raid, figure out what loot you’ll get, and the encounters you’ll discover. Please bear in mind that this guide does contain spoilers for the Castle Nathria raid – including some minor Revendreth zone spoilers, so only read on if you’re happy to learn more about the upcoming encounter.

As in most recent WoW expansions, Shadowlands raiding will open a bit at a time. On December 8 in North America and December 9 in the EU, Normal and Heroic difficulties will become available. December 15/16 marks the opening of Mythic raiding and kicks off the world-first race, as well as starting Raid Finder/Looking for Raid difficulty for Wing 1.

After that, LFR wings are staggered every two weeks: Raid Finder Wing 2 opens January 5, Wing 3 opens January 19, and Wing 4 opens February 2. While you can expect some Normal and Heroic raids to show up in the Looking for Group tool, this expansion offers a real incentive to join a guild to get into the raid earlier.

Keep in mind that cross-server Mythic raiding will not open until the Hall of Fame fills with the top 100 raiding guilds to complete Castle Nathria for both Horde and Alliance factions. 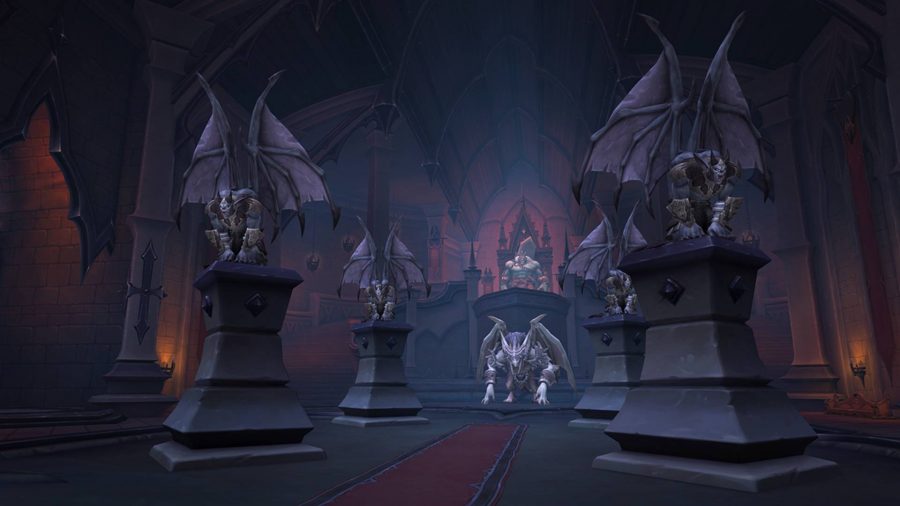 The zone story of Revendreth chronicles the vampire-like Venthyr and the struggles of the rebel Prince Renathal and his allies. The Venthyr are suffering under an extreme Anima drought, which is leading to rationing and increasingly desperate measures by the zone’s leader, Sire Denathrius.

It turns out that Denathrius is actually causing the shortage, siphoning off every bit of Anima he can collect and funneling it directly into The Maw to fuel the Jailer’s evil schemes. The Castle Nathria raid offers players the chance to end his reign and destroy his allies, in an attempt to thwart the Jailer. 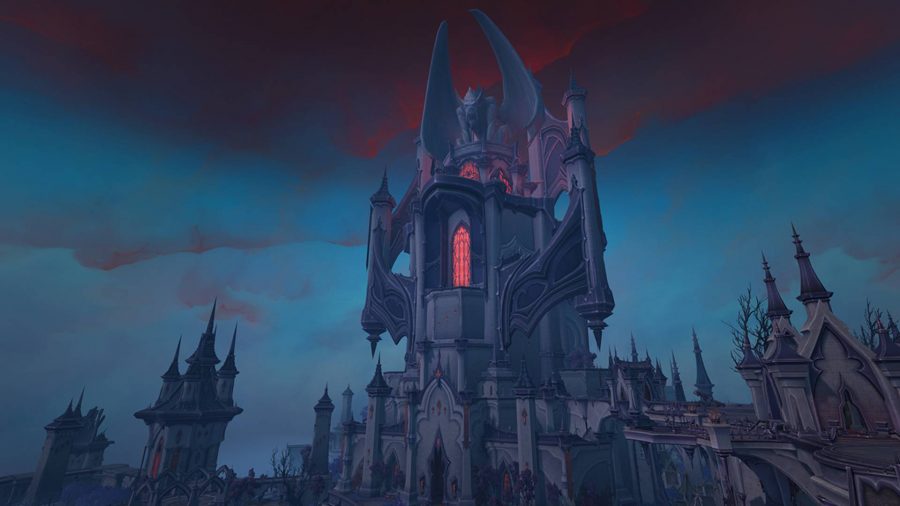 Blizzard has set out to make gearing up more challenging in the Shadowlands, and this raid is no exception. Fewer pieces of loot will drop from each boss than in the Battle of Azeroth. And unlike that raid, and previous expansions, bonus rolls are no longer a thing.

Instead, the bosses you kill in Castle Nathria will open up additional slots in your weekly Great Vault. This is the replacement for the Mythic Plus dungeons chest and the PvP chest, with raids thrown in. There is a row of three slots in the Great Vault that you can fill by killing Castle Nathria bosses.

Kill three bosses and you’ll fill the first slot; seven will fill the second; and ten bosses on any difficulty will fill the third. What item level loot you’re offered in each slot depends on the difficulty level of the bosses you kill in the raid. Any boss you have killed before on that difficulty is included in the loot “pool” for those picks.

As with other Great Vault selections, opening up the raid row doesn’t increase the number of items you get; you still have to select one item from all nine possible slots in the Vault. It just adds raid loot to the possibilities, and gives you additional items to pick from. 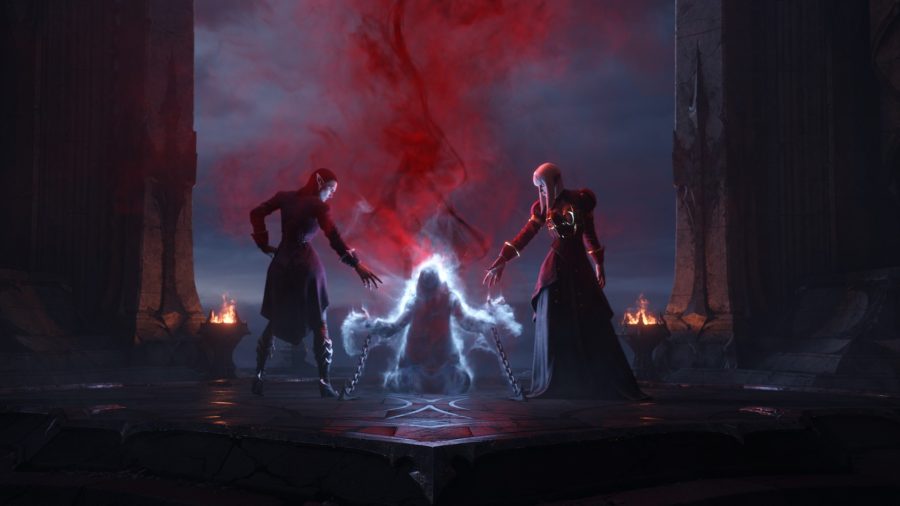 A giant bat, Shriekwing forces players to hide behind pillars, and deal with damaging pools of blood on the floor, as well as raid-wide damage, a tank swap, and smaller bats that dive from the ceiling.

After you defeat Shriekwing, you have a choice between two wings: Catacombs, which has the Huntsman, the Destroyer, and Lady Inerva; or Royal Quarters, where you can fight the Sun King’s Salvation, the Artificer, and Council of Blood.

This Venthyr humanoid shares a health pool with his pet. You must kill Altimor to unlock the Hungering Destroyer. He has only two abilities, and both require players to spread out. He summons three pets over the course of the encounter, which apply debuffs to the tanks, summon adds — including one that needs to be healed to full — and one that requires movement to kill, but movement causes damage to the raid.

You must kill the Destroyer to move on to Lady Inerva. He’s a big anima giant, who will occasionally strike players with a debuff that makes them impossible to heal until other players stand next to them, soaking up their miasma and taking damage. He’ll cast lines of Volatile Ejections towards players that need to be avoided, and will attempt to suck them in and kill them.

Lady Inerva is the end boss of the Catacombs, and she uses Anima containers to augment her powers during the fight. Players have to drain the containers to keep her from becoming overwhelmingly difficult to beat. On Mythic difficulty, this is even more fun, because draining one container fills the others.

This is the fight to save Kael’thas’ soul. The former leader of the Blood Elves, Kael has been the end boss of one raid already, plus a dungeon, and reappears here as a soul to be redeemed.

This is primarily a healing fight for the first phase, in which healers top off his soul and the raid prevents monsters that are trying to damage him. In the second phase, he becomes unhealable until a shadow of his former self is defeated. 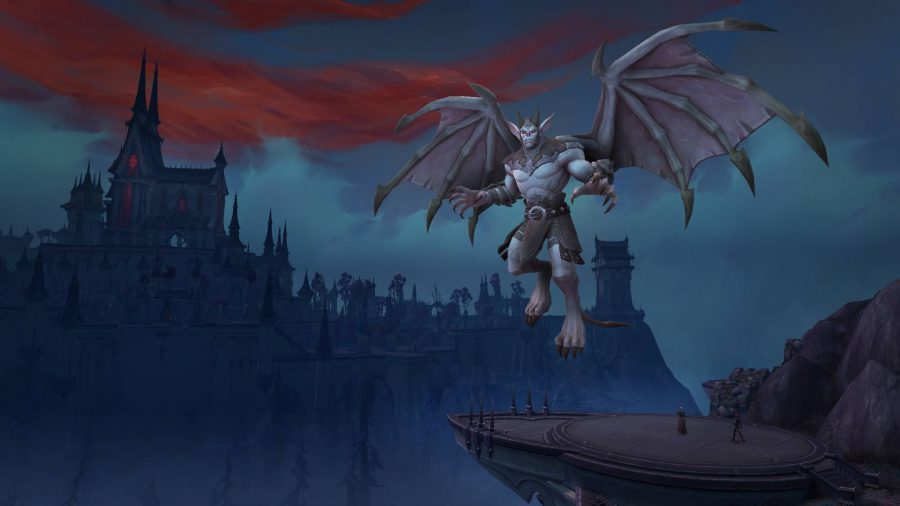 Xy’Mox is an evil Broker; killing him and Sun King’s Salvation are required to move on to the Council of Blood. He has a reasonably complex three-phase fight, with players dropping portals they can use to teleport across the room to avoid his mechanics, including mind-controlling adds, exploding seeds and a large guaranteed-death area of effect ability.

The Council of Blood

This is a traditional Council fight, and marks the end of the Royal Quarters wing. You’ll face three bosses, and each time you kill one, the rest heal to full. But the truly unique part of this encounter is what happens when they hit 50% health: You’re required to participate in a (literal) dance with other NPCs. Do it successfully and get a haste buff. Fail, and you take damage (and get no haste, losing your buff) until you catch up.

Both the Catacombs bosses and the Royal Quarters bosses must be defeated before you can take on the final set of challenges in the Upper Spire.

This fight takes place in the same room where you defeated Shriekwing. Sludgefist is a giant who occasionally links players together, race to get him dead before he performs an ability that kills the raid. He must be defeated to move on to the next part.

This is a two-boss fight (with General Kaal from the Shadowlands Sanguine Depths Wow Shadowlands dungeon and General Grashaal) where each boss has its own separate health pool. In the first phase, you’ll fight Kaal on the ground while Grashaal hits the raid while aloft; in the second phase, they swap. In the final phase, you fight both together.

The final boss of the WoW Shadowlands Castle Nathria raid – Sire Denathrius is devilishly difficult. In the first phase, players have to keep their stacks of Sin low, because he’s going to blast them to the edge of the room, where they’ll be slowed by those stacks and unable to use their abilities until they get back to the boss.

In the second, you’ll fight both him and his sword, and some pretty inconvenient adds. In the final phase, he starts to fill the chamber with blood-like Anima pools, meaning you must kill him before you run out of room.