Think you’ve got what it takes to wield the best of the best in WoW Classic, legendary weapons? Rare and Epic weapons are much less common in vanilla than they are in live World of Warcraft, but even they pale in comparison to ‘oranges’, or legendary items. Not only does earning these overpowered arms take significant luck, it also required a lot of grinding, not only for the materials to complete them, but also just for the attunements to the raid instances where some parts reside.

Three WoW legendary weapons will be included in WoW Classic. Thunderfury, Blessed Blade of the Windseeker, is a one-handed sword for warriors, paladins, rogues, and hunters. Sulfuras, Hand of Ragnaros, is a two-handed mace available to any class that can wield that weapon. And Atiesh, Greatstaff of the Guardian, will be available after launch to mages, priests, warlocks, and druids.

The first two are available to you when WoW Classic launches on August 27, 2019. Atiesh will come as part of the fourth stage of the vanilla WoW content rollout, which includes the original Naxxramas raid instance. That timing has not yet been announced. 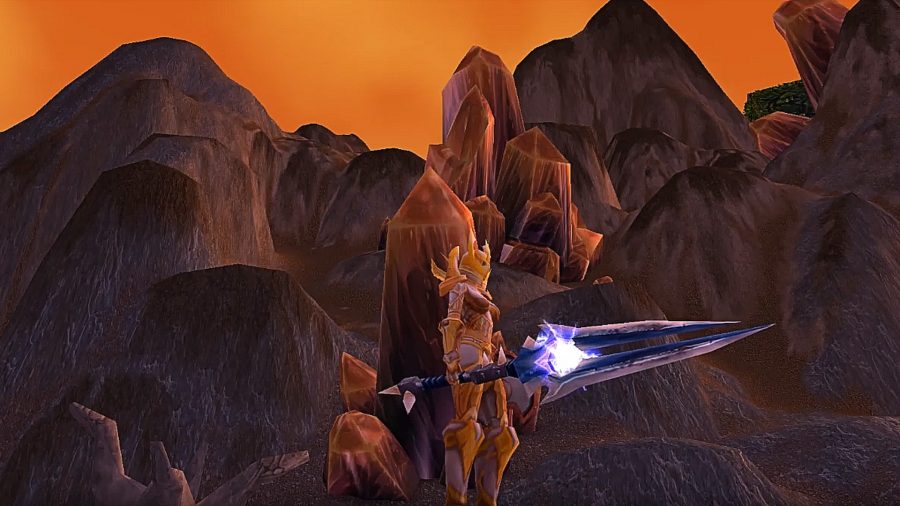 THUNDERFURY, BLESSED BLADE OF THE WINDSEEKER

The blade, the myth, the meme: Thunderfury had such an impact on World of Warcraft when it released in vanilla that it is still a commonly-used meme to represent something rare and worth showing off, 15 years later. The sword belonged to Thunderaan, Prince of Air, until he was defeated by Ragnaros, the final boss in the Molten Core raid instance. Trivia: Thunderaan’s father was Al’Akir, who players face off against in Cataclysm’s Throne of the Four Winds raid.

Ragnaros took the pieces of Thunderaan’s power that were left, split them into two bindings, and gave them to his lieutenants in the Molten Core raid: Baron Geddon and Garr. Geddon got the left half and Garr the right. Your first step to obtaining the legendary blade, which can only be wielded by warriors, paladins, rogues and hunters – yes, hunters – is to kill those two repeatedly, week after week, until you get one of each binding.

Bindings are extraordinarily rare, dropping infrequently, and only one person in your raid of 40 people can get them, so if you’re raiding with a guild, you will probably decide as a group which person gets to start the quest. It’s worth noting that there is a quest for easy transport into Molten Core, but it’s not required or an attunement; if you don’t have it, you can clear your way through the five-man Blackrock Depths dungeon to the entrance and zone in. Do get the quest from Lothos Riftwalker outside BRD for the shortcut before you go in, as you can complete it during that dungeon run.

Once you’ve obtained at least one binding, you can chat with Highlord Demetrian in Silithus, who gets you started on the quest. In addition to killing Ragnaros and obtaining both bindings, you’ll need 10 Elementium bars. These exceedingly rare crafting materials come from combining Fiery Cores (which drop from fire elementals in Molten Core), Elementium Ore (which drops from goblins that immediately sprint away from you in the even-more-difficult Blackwing Lair raid, which does have an actual attunement questline), and 10 Arcanite bars each, which can be crafted from rare Arcanite crystals and Thorium bars discovered by miners and transmuted by alchemists with a two-day cooldown.

Once you complete the crafting, you’ll summon Thunderaan in Silithus, who will show his gratitude by attempting to kill you. Bring a very large group (preferably a raid) of friends to help you kill him. Turn in that final quest and you will be able to link Thunderfury, Blessed Blade of the Windseeker in capital cities’ trade chat. 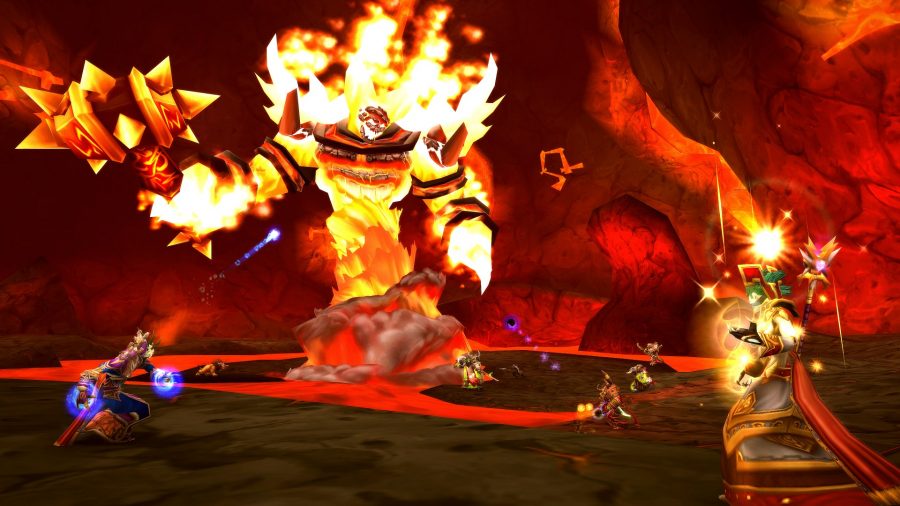 This two-handed fiery mace is the one wielded by Ragnaros himself, and appropriately, the quest begins with a rare drop from the fire lord: the Eye of Sulfuras, which has a roughly 3 percent drop rate from Ragnaros at the end of Molten Core. Once you have the eye, you can combine it with a Sulfuron Hammer to create Sulfuras, Hand of Ragnaros. There isn’t a class requirement on the quest, but only paladins, warriors, druids, and shamans (with a talent) can wield two-handed maces.

The Sulfuron Hammer can be crafted by a 300-skill blacksmith who has the plans, which are sold by Lokhtos Darkbargainer, who hangs out in the Grim Guzzler bar in the Blackrock Depths dungeon. To buy the plans, your blacksmith will need a Sulfuron Ingot, which drops about 30 percent of the time from Golemagg the Incinerator in Molten Core. The hammer itself can be traded once made, so you don’t actually need to be a blacksmith or have the plans yourself to create Sulfuras, though you do have to loot the Eye.

If you don’t buy the hammer, but instead collect the materials to make it, here are all the materials you need to craft the WoW Sulfuras, Hand of Ragnaros:

Once you have both the hammer and the Eye in your bags, right clicking the eye will create Sulfuras.

Even with all the ridiculous materials, this is the easiest of the three weapons to obtain, since it comes from only clearing Molten Core and doesn’t rely on multiple extremely-rare dropped items. 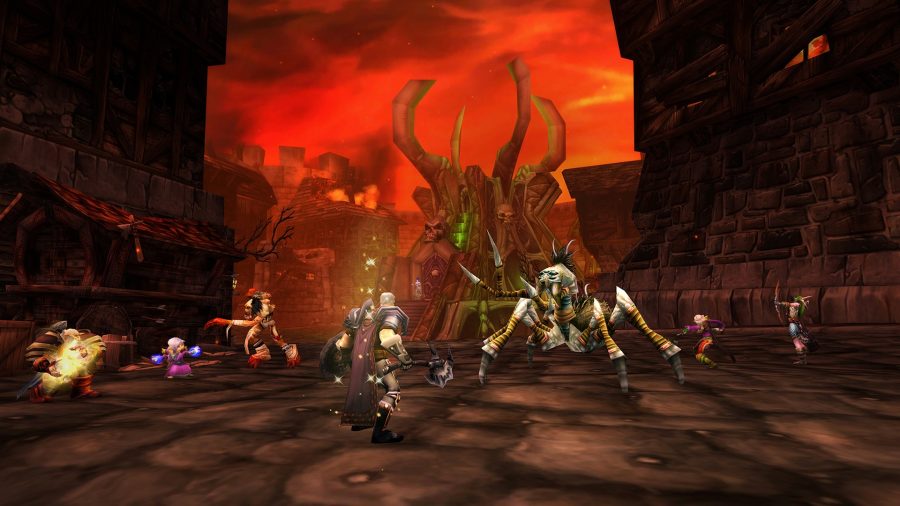 ATIESH, GREATSTAFF OF THE GUARDIAN

This Classic WoW legendary staff, available to druids, priests, mages, and warlocks, is one of the rarest WoW legendary weapons in existence (that wasn’t an error or a temporary item). That’s because it relied on raiding the original Naxxramas, which only a tiny, tiny percentage of the population did. Not only was the attunement for Naxxramas tedious and taxing, but it required a level of gear and dedication that even most raiders didn’t have in vanilla World of Warcraft. There are many WoW Classic servers where only a small number of players successfully completed Atiesh before it was removed.

Atiesh, Greatstaff of the Guardian, was so named because it was the staff of the Guardians of Tirisfal, ending with Medivh. It was shattered when Dalaran fell to Archimonde. Interestingly, the staff has the ability to create a portal to Karazhan, which in vanilla was just a burned-out tower in Deadwind Pass. It wouldn’t become an active dungeon until the Burning Crusade expansion.

Atiesh will not be available at launch in WoW Classic. Instead, it will be part of the fourth stage, which is when the 40-player raids in Naxxramas and Ahn’Qiraj will be released. Once Naxxramas is open, bosses inside will drop Splinters of Atiesh, bind-on-pickup items for the four WoW Classic classes eligible for the staff. As with the Bindings for Thunderfury, it is likely that your raid group will decide which person in the raid will begin building Atiesh, because it takes quite some time: The staff requires 40 splinters, and the drop rate per boss is around 15%. In addition, your server must have completed the massive event to open the Gates of Ahn’Qiraj, to give players access to the raid instances inside.

Combining all 40 splinters creates the Frame of Atiesh, which gives you a quest to visit Anachronos, a bronze dragon. Assuming that you are at least neutral reputation with the Brood of Nozdormu (a faction that typically requires some fun grinding in Silithus), he sends you off to find the staff’s base and head. They drop from C’Thun, the last boss in the raid Temple of Ahn’Qiraj, and Kel’Thuzad, the last boss in Naxxramas, respectively.

After you have all the pieces, you must cleanse the staff in the dungeon Stratholme, and kill the demon Atiesh. To beat him, you’ll need someone who can disarm him, as you typically must use one of his own legendary swords against him to win.

There you have it; your guide to the three most powerful, envy-inducing WoW Classic weapons around. Happy legendary farming, by which we mean: don’t drive yourself mad.