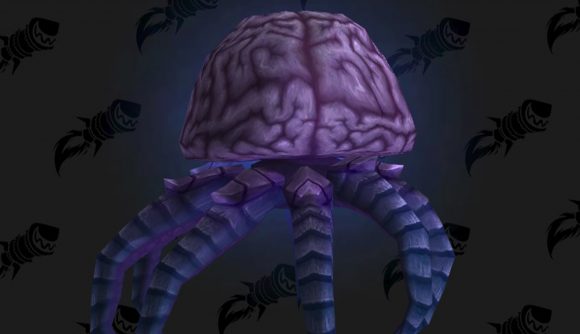 The latest World of Warcraft secret hunt is over, and you can finally get the Hivemind mount for yourself – if you’re willing to put in a whole lot of work. The path to grabbing the Hivemind went live with the 8.1 patch earlier this month, and it’s taken the community the better part of a week to track down all the myriad steps to pick it up.

When you use the mount, you’ll turn into the Hivemind itself, and can carry four people with you – each of them adds a 10% speed boost, and that bonus stacks. The catch is that you can only bring along the party who completed the final ritual of the process with you.

That process is a doozy, and far too long to run down here – your best bet is to check out the excellent step-by-step guide provided by the folks at Wowhead and the Secret Finding Discord. The gist is that you need to collect four coloured monocles, then join up with a full part of folks who have done the same to complete a notably obscure set of puzzles – yes, including platforming puzzles.

You’ll need to pick up the Talisman of True Treasure Tracking to even get started and interact with the items involved.

Related: Log in to the best MMORPGs on PC

WoW players have been waiting for the Hivemind for a very long time, since it was one of the earlier items datamined ahead of the release of Battle for Azeroth. It didn’t make the cut for the expansion itself, but it’s – again – here as of patch 8.1.