Two of the weirdest things about MMO design are putting hours of effort into content the vast majority will never see, and trying to balance systems that can operate with an hour a week of playtime along with ten a day. Both collided in World of Warcraft: Legion’s legendary system which has proved something of a sticking point for the traditionally hard-to-please community. In essence, it’s an extra level of loot RNG on top of normal systems, making it possible for various significant events – beating dungeons, downing raid bosses or completing sets of quests – to reward extra-powerful, irreplaceable loot.

For most, it’s a small bonus they might have encountered one or twice since release. Players with a lot more time invested, however, were discovering that progressing past the fourth legendary acquired – out of roughly seven per character – was extremely unlikely. Rumours abound of a soft-cap and on the forums last night, taking a little break from Thanksgiving celebrations, game director Ion Hazzikostas explained that up until it was changed last week the system wasn’t stopping anyone getting a fifth legendary – it just wasn’t helping them either.

For the next changes to the game, see our round-up of WoW patch 7.1.5.

Those who have played Hearthstone or Overwatch are likely familiar with Blizzard’s luck-guard RNG mechanics. Pity timers are in place in each game that stop someone dropping their paycheque on packs without getting at least something special. The community did the maths on Hearthstone packs and we’ve done it on Overwatch loot boxes, and Blizzard freely admitted the same thing was in place for WoW’s new legendary system. They didn’t go into specifics, but generally every time you complete a task that could reward a legendary and don’t get one, your chance of doing so the next time pops up a bit.

What Blizzard hadn’t mentioned was that once you had four, that stopped applying. Your chance was locked at the initial, very low value – probably something in the fractions of a percent. That meant it wasn’t impossible to get legendaries 5, 6 or more, but the system had no interest in helping you get there, meaning a bottleneck of people glutted at the four spot as they endlessly missed on their rolls to loot a legendary. 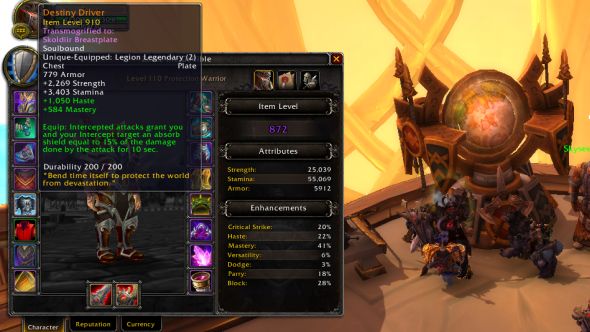 “As its name suggests, the ‘bad luck protection’ system exists to protect the unluckiest players from the cruel fate of the dice. Those who were on the other end of the spectrum in terms of good fortune, we figured, didn’t need a system to help put them even farther ahead of the rest of the world,” reads Hazzikostas’ explanation as to why. “We drew that line at 4 legendaries, initially, planning to raise it as time went on. Once you’d gotten 4, you could absolutely get more, but the invisible hand of ‘bad luck protection’ would no longer help you. Almost by definition, if you had 4 legendaries in, say, early October, you were super-lucky. You didn’t need help getting more.”

Hazzikostas goes on to explain that, somehow, Blizzard once again underestimated just how much people would play one of their games. By November, it wasn’t just some lucky people with four legendaries, it was a (very small, “hundreds in millions”) group that had beaten enough bosses and finished enough quests to have an expected count of four. They were then running up against this barrier that was meant to stop them pulling away with luck, when actually their playtime should be pulling them away anyway. Therefore the ‘soft-cap’, as the community dubbed it, was removed.

“‘Bad luck protection’ now applies indefinitely. Most of the players in this category have probably been focusing on Mythic Trial of Valor for the past week, and since wiping repeatedly to raid bosses during progress sadly can’t award legendaries, they haven’t had a chance to see the effects of the change just yet. If/when some players get to a point when they have every legendary available for their spec, then so be it. They certainly will have earned it, and there will be more coming in future patches.”

Of note is a wider discussion within the playerbase about the state of the legendary system as a whole. Unsurprisingly, folks who don’t play too much, play roles that don’t regularly compare their numbers with others, or have been lucky with which legendaries they’ve grabbed (hello, that’s me on all three, how are you) aren’t seeing much of a problem, while hyper-competitive DPS players see more issues. As one of the louder portions of the community, that means the complaints are loud and clear. That is very likely going to be a topic of discussion in the upcoming Q&A at some point in the first couple of weeks of December, probably on Friday 9th or 16th based on previous timings.