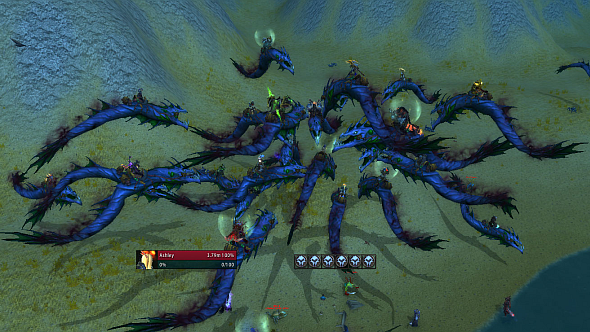 Chalk up another win for the World of Warcraft community in their friendly contest with Blizzard, as yet another of Azeroth’s well-hidden secrets is uncovered.

We’ve got a full guide to Legion patch 7.2, plus a chat with Blizzard about the biggest patch in WoW history.

That secret is Riddler’s Mind-Worm, an epic mount that’s eluded WoW’s dedicated Secret Finding Discord Community throughout the current patch, 7.2. The patch went live on March 28, so the Mind-Worm has stayed hidden a good deal longer than Legion’s last major secret. That was Nightbane, a skeletal dragon that drops a fiery draconic mount, and he was found just two days after he was introduced in patch 7.1.

According to Wowhead, Riddler’s Mind-Worm was finally found after “hundreds of hours of work and coordination as players scoured the continent for clues related to each zone.”

These epic secret hunts have created some great stories throughout WoW’s current expansion, Legion, and are a big part of the venerable MMO’s resurgence. Wowhead even say that the Secret Finding Discord Community requested they not be linked to, “due to the sheer volume of traffic” they’ve been receiving.

WoW player Nightswifty compiled the work of the secret hunters into this comment on the Mind-Worm’s Wowhead page, and also into a handy illustrated guide on Imgur. Check either, if you too would like to ride a creepy blue worm that “feeds on your thoughts”.

By the way, senior game designer Jeremy ‘Muffinus’ Feasel is the keeper of all these secrets on Blizzard’s end, and he’s been following the community’s progress with the odd hint. Here he is, signing out on the saga of the Riddler’s Mind-Worm:

As Wowhead note, there are still a few mysteries left in Legion “including the purpose of Pebble, The Broken Hook, Shoe Shine Kit, Squirky, and a number of tames like Lalathin, Gon, and Lost Spectral Gryphon.” No doubt Muffinus will be back with another devious riddle.