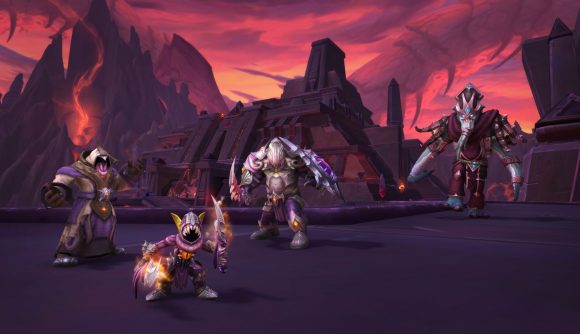 Some of the less packed World of Warcraft realms will start being connected up to other pre-existing realms over the course of this summer, WoW developer Blizzard has announced. The decision follows a recent, very extensive study the studio undertook to look at populations in every single WoW realm in the world, and it’s taking place because “World of Warcraft is best when you have a community of other players around you”.

Blizzard’s announcement on the WoW forums explains, while the game does have some support for cross-realm play, plenty of the online RPG game’s aspects are still largely dependent on the slice of Azeroth you’re in. “From your history with your guild to your interactions with the economy around you, a realm with a healthy population provides more opportunities, and it’s been several years since we last connected some realms,” the dev explains.

Now the “comprehensive” study’s complete, the realm-connecting for low-population instances will happen over the next two to three months, and the changes will be implemented during scheduled maintenance downtimes. “A few realms” will get connected each week until every sparsely-populated instance has been plugged into “a substantially larger population of players”.

The good news is this won’t catch anyone by surprise, Blizzard assures players, as it’s going to “post notices in advance of each week’s connections in the appropriate regions and languages”.

“During each maintenance period,” the post explains, “everything will be automatically combined for the affected realms. When maintenance is complete, players on affected realms will log into Battle for Azeroth and find that they’re now part of a larger connected-realm community.” Plus, relevant discussion forums for realms will get connected up, too.

It’s not clear which of the MMORPG game’s realms will be affected, or what the threshold for “low-population” is exactly, but you should get some notice before any changes happen if you’re in a realm that’s due to get merged.