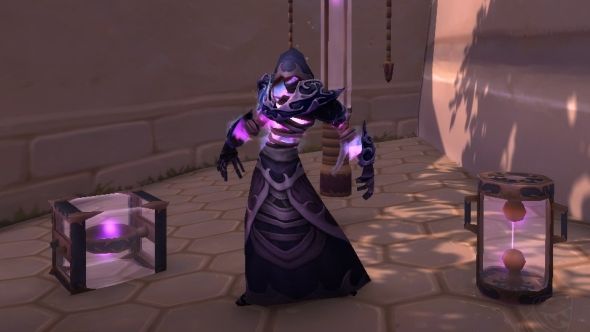 A new World of Warcraft expansion means one thing above all else – signature Blizzard easter eggs, particularly in reference to their own games. Well Destiny is an Activision Blizzard property, so close enough. Xûr, Agent of the Nine, is a vendor in the immensely popular, sadly console-only shooter that sells rare items on a random rotation each week. His new partner-in-Warcraft Xur’ios, Vaultkeeper of the Void, also has a rotating inventory of high-level items, though not ones that directly impact player power.

Want more on where WoW’s headed next? Here’s everything we know about Legion’s release date, changes and more.

Xur’ios isn’t in-game yet, but will be chilling out in the newly-moved capital city of Dalaran, Legion’s main hub, once the expansion releases. He has his own currency, ‘Curious Coins’, which are acquired from doing various endgame challenges in-game. They can be used on his unique inventory, which includes various recipes and one item that will change every day.

The last item is where the interesting bits lie. These include a rocket launcher called Gjallar’s “Horn”, quotes included, which does massive blast damage in an area, and Krota’s Shield, which makes you absorb a serious amount of punishment for a short time. While useful for questing, those pale in comparison to a new mount (that looks like a giant turtle), an item to give you an extra piece of gear for your followers every week and a unique enchantment that will lead to even more loot.

This is all according to a comment on WoW database website Wowhead that breaks down everything Xur’ios can sell, how to get the coins and more. If you’re unfamiliar with the site, we interviewed site director Alexis Kusy about it earlier this year.