UPDATE: World of Warships has just entered open beta, meaning you can grab your own boat right now and start firing artillery around the place like nobody’s business.

Baots! I mean boats. Intuition-defyingly buoyant boats. Floating around on the ocean, firing car-sized shells at one another from kilometres away and sending hundreds of men to their agonising, watery deaths. Those boats. Why do we send our boats out to fight? Because there are enemy boats out there in the water. And why are there enemy boats out there? Because our boats are there too. If only we could get together and agree to have no boats on the ocean. There’d be less drowning. Things would be better.

But they’re not! So we’ve got World of Warships, a tactical World War Two boat-fighting game from the people who brought us World of Tanks and World of Warplanes. A free-to-play multiplayer combat game all about naval warfare. I’ve been playing the beta. Here are some thoughts.

In World of Warships you’re placed in charge of a single boat and sent into battle against a dozen or so other boats, lobbing artillery and shells for miles, launching torpedoes and shooting down aircraft in order to dominate a map and win the game. Over time and as you win battles you’ll earn a number of different kinds of currency that can be spent on upgrading your current ship with new modules and tech, or on amassing a larger fleet of boats to choose from before fights.

There are four main kinds of warship. The sprightly and torpedo-armed Destroyers, the aircraft-bothering and gun-laden Cruisers, the brutal and heavily armoured Battleships, and the strategic and plane-spawning Aircraft Carriers. Each battle will pull together two balanced teams made up of a number of each kind of warship, in some effort to create a game that’s fair and fun for all players, no matter how advanced any one player’s ship is. 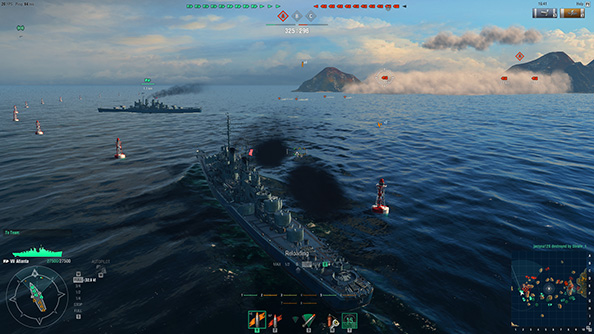 That also means you’ve got to learn your position on the battlefield and understand the implicit roles that each ship must take on. Aircraft Carriers must stay well clear of enemy ships for example, and instead send their loyal squadrons of dive bombers, torpedo bombers, scouts and fighters all across the map from an bird’s-eye perspective. Destroyers are fast enough to hunt Battleships, and Cruisers generally need to stay out of the way of anything that has giant guns, but no ship is truly fast in this game.

These are some realistically slow-ass boats, with giant turning circles and massive metal hulls that take an age to speed up and slow down. World of Warships is all about careful positioning and movement, bringing enemy ships within range, aiming, firing, adjusting and firing again. You need to avoid exposing the broadside of your ship, you need to have all your cannon pointing the right way. You need to be aware of this one weird naval warfare trick about an “immunity zone” between two ships, a mystical range — not too near, not too close — at which shells will hit your armour at shallower angles and cause less damage. The immunity zone is a real thing, and it’s in World of Warships. 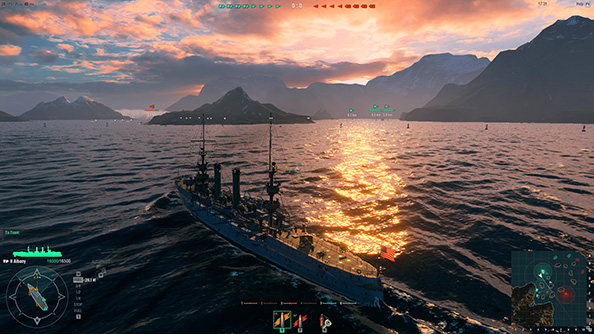 Not that you’d need to know much about it. To actually play, World of Warships controls like a straightforward third-person shooter. You manoeuvre your cumbersome boat by hitting W a few times to crank up your engine speed, and press the Q or E keys to adjust the rudder incrementally. Once in motion, you only need to press these movement keys again to adjust your course. From there, you’re simply pointing your reticule at any bits of ocean that have enemy ships on them and pressing the left mouse button to fire. It’s deceptively arcadey, and not at all like a third-person shooter like I just said at the start of the paragraph. Sorry.

Shells take a few seconds to carve their graceful ballistic paths through the air, meaning you ought to be firing at where enemy boats are going to be, rather than where they are. Once sighted however, your aim will then pan along with your targeted boat, allowing you to carefully lead the target and increase the accuracy of your next volley. Seeing shots land is satisfying. 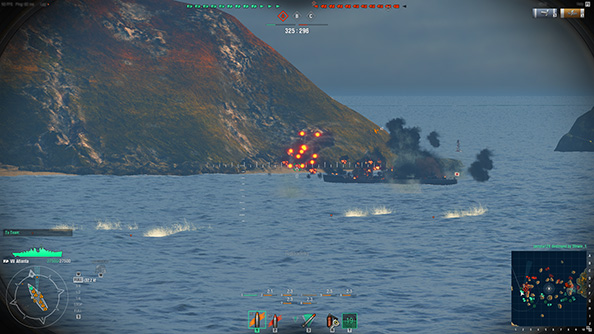 At first, you’ll struggle to hit anything. And even if you do, heavily armoured ships take a proper pounding before they go under. World of Warships’ battles can devolve into wars of attrition, but ultimately the game’s mix of different ship classes and how they all interact with one another determines which side has the advantage. A fleet in correct formation, made up of players who know what they’re doing, know how to most effectively use their AI-controlled anti-aircraft guns, or the best range at which to fire torpedos in a given situation, will probably win.

That said, I’m pretty awful at it. There’s a deeply strategic meta-game happening here that’s more than just driving the boats around in circles and firing your guns in the air — I know because people in the chat window seem to know what they’re doing — but in my time with the beta I’ve driven into seven different islands and had my boat exploded by innumerable unseen torpedos.

In fact, here are a few mistakes I made, so that you can learn from me. They’re mostly about not steering your boat into things.

World of Warships is already looking fairly complete at this stage of the beta, with a sprawling roster of iconic World War Two vessels to unlock through premium or in-game currencies. World of Tanks players will feel pangs of familiarity from every corner of the game, from its upgrades system to the ability to employ and train commanders for each of your ships, but there’s enough different here to demand the attention of even the most ardent tank fans.

And if not, just imagine the ships are giant floating tanks. It’s all pretty much the same idea.