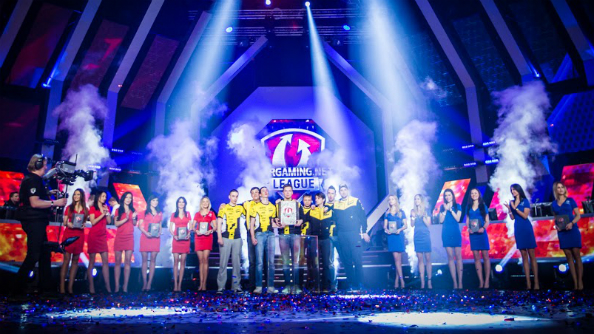 At a massively produced, expensive and high-profile event built around World of Tanks, the biggest cheer by some distance is heard during a showcase match for Wargaming’s promising newcomer, World of Warships. The whole audience watches with baited breath as a spread of torpedoes makes its way – slowly but inevitably – towards a rival destroyer. By the time they’ve noticed the incoming fire it’s too late. The entire port side of the vessel erupts in a sequence of explosions that render the ship incapacitated. It’s a sitting duck, and the audience applaud as the killing blow is landed, resulting in a dazzling fireworks display that’s matched only by the tactical play that produced it.

For more triple-A titles that won’t cost you a penny, check out the best free PC games.

World of Warships exhibited a great deal of promise during its first outing in an eSports format at the recent 2016 Wargaming League Grand Finals in Warsaw. The showmatch was not without its issues: the World of Tanks commentators struggled with the change in game and the information graphics could be made much clearer. Also problematic was the disorienting and chaotic camera work that made it impossible to tell what was happening beyond whichever ship was in the spotlight. Knowing who was in the lead and what objective was under threat was anybody’s guess.

Such hiccups are to be expected from a debut, but the way World of Warships managed to impress viewers despite these faults speaks to its potential on the competitive scene. When World of Tanks started out as an eSport it was an equally messy affair, and yet its viewer numbers have grown consistently since the Wargaming League started in 2013.

As tempting as it is to draw comparisons between World of Tanks and World of Warships, the two are notably different. “When you shoot a shell in World of Tanks it’s immediate, it hits something. When you shoot in World of Warships it takes ages,” Wargaming’s head of European eSports, Nicolas Passat, explains. “When you shoot a torpedo, that’s a unique experience that you will not have in any other game: it slowly goes in a direction and you are actually craving to see if it will hit them or if they will be able to outmanoeuvre it. So even if everything is slow, there is still great capacity for momentum”. 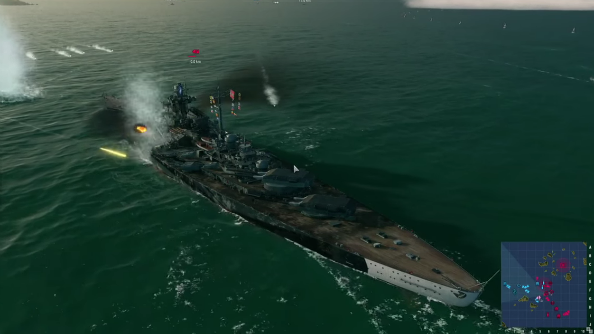 “The second thing to consider,” adds Passat, “[is that] the game is beautiful – it’s massive, it’s realistic, it breeds interest by itself. Again, that’s unique and we don’t see it anywhere else”. Certainly, when displayed on a pair of enormous screens World of Warships becomes a spectacle of warfare. Battleships the size of small islands carve their way through the map, columns of Stygian smoke pour out of downed vessels, and everything in sight is obscured by a miasma of bullets, planes, and artillery volleys. Compared to the sight of 14 tanks fumbling their way around grey, bombed out towns and deserts, World of Warships is a visual treat.

Part of the problem for World of Tanks is how sparsely populated its maps are in contrast to those of World of Warships. With a 16-player deficit between World of Tanks’ normal and eSports variants there’s a lot of empty space to be exploited, which unfortunately results in a lot of tanks doing a lot of nothing. World of Warships boasts a smaller player-count deficit of just ten, that’s 14 players on a map made for 24, but it’s how it fills its space that makes it the more compelling of the two. At any given moment there’s guaranteed to be exchanges of fire, aerial clashes or torpedoe spreads – the scale is larger and the pace slower, but the need for quick reflexes and intelligent tactical play is constant rather than fleeting. 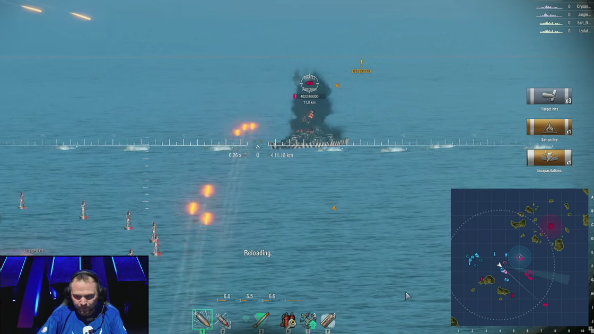 The game’s sudden arrival towards the end of the event signalled a marked change in tone. The World of Warships showmatch conjured up a genuine sense of excitement among the audience and was a worthy addition to the finals; more so than Wargaming’s version of the Chuckle Brothers – who would appear during intervals to shout at the crowd – and the array of ring girls constantly being ogled by the camera’s lens. Between the absurdly overproduced video snippets introducing each team as if they were an elite military unit and the opportunity to pose with models by a tank, World of Warships was something I could take seriously.

That’s not to say that World of Tanks didn’t provide enough action on its own, just that it was tainted somewhat by the manufactured evangelism that surrounded it: wristbands that light up when you clap, inflatable tubes that make a loud noise when knocked together (I’m told they’re called thunder-sticks, but frankly that’s ridiculous), Wargaming League scarves to proudly hold above one’s head. The final match couldn’t have been a better example of what eSports are capable of, with every round providing a memorable play or a new potential MVP. The fact that winners Na’Vi claimed the $150,000 prize money off the back of a Hellraisers tank becoming stuck on a rocky hillside was the icing on the cake, a mad ending that nobody could have dreamed up. 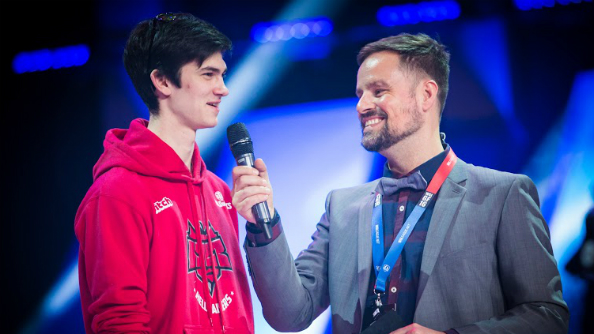 The difference in audience reception between the World of Warships showmatch and the culminating showdown of the entire event was minimal. Wargaming have ploughed plenty of time, money and energy into ensuring that World of Tanks would grow into a viable and leading eSport, and for the most part they’ve succeeded, but their testing of the battleship-filled waters teased at something far more promising.

It’s not like World of Tanks had a seamless transition into the world of eSports, either. The 2014 Grand Finals were something of a setback, as Wargaming’s marketing product manager Maxim Chuvalov admits. “We had matches that lasted three hours, matches with 11 draws in a row because the stakes were too high and everyone was sitting as ducks in bushes so as not to make any mistakes. It was not so interesting to watch. It was not so interesting to play”.

2015’s Grand Finals were much improved, with a new attack/defence format, buffed health points and the inclusion of tier 10 tanks encouraging more direct confrontation between teams. But still, the formula was off. “We understood a very big issue we had at that moment, we didn’t have enough metagame … for each map and each tank, almost all matches were mirrored”. The result was evident in this year’s Grand Finals: a wide variety of tanks and tactics, and skirmishes breaking out at healthy intervals. 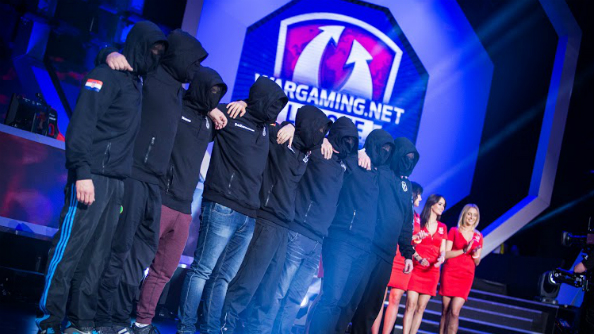 The changes won’t stop there either, as Chuvalo explains – starting with plans to increase World of Tanks eSport’s player count to 30. “It has its drawbacks, it has risks, technical risks, broadcasting risks, human management risks”. However, the rewards could be massive for Wargaming, “A big problem with eSports in World of Tanks right now is that there is a huge gap – a huge, huge gap – between even clan [players] and pro players… the guys from clans see some match from the eSports Grand Finals and they say, ‘No, it’s out of my league, I don’t even try to go there.’ But we want it to be a clear, visible, transparent journey for players”.

These lessons look to have already been learnt for World of Warships, which straddled the gap between standard game and eSport perfectly. Of course this was only a showmatch, so exactly how Wargaming plan on developing their product into a fully-functioning eSport is still unclear. For its few mechanical shortcomings, World of Tanks still has both the fans and the relative heritage necessary to make it tick. In terms of player numbers, World of Warships is definitely the younger sibling, but considering it’s not even a year old there’s plenty of time for it to escape the shadow of its tracks-and-turret counterpart and begin making waves in this burgeoning part of the games industry.

Reckon World of Warships has what it takes to be a top eSport? Let us know in the comments below.