I’m one of those miserable sods who gets a lot more pleasure out of moaning about the World Cup than watching it. So I was more surprised than anyone that I found myself very happy that this competition of footballs and men in shorts was bringing me no small amount of joy. And it’s all thanks to World of Tanks and the game’s temporary football mode.

For the last few days, I’ve been ramming an oversized football around a well-trimmed pitch. In a tank. It’s the most I’ve ever enjoyed the sport. And it’s provided some of my favourite World of Tanks moments.

Here’s the deal: two teams of three face off against each other in T-62A Sports tanks. These are not your typical lumbering behemoths. They’re spry, extremely mobile and ostensibly invulnerable. Matches finish when one team scores three goals or the timer runs out.

I’m getting giddy just thinking out it. Giddy. That word hasn’t appropriately described me for a very long time.

At first, this new mode is just silly. While the tanks are nippy things, they are still tanks – not exactly suited for football, or indeed any sport that isn’t singularly concerned with blowing shit up. 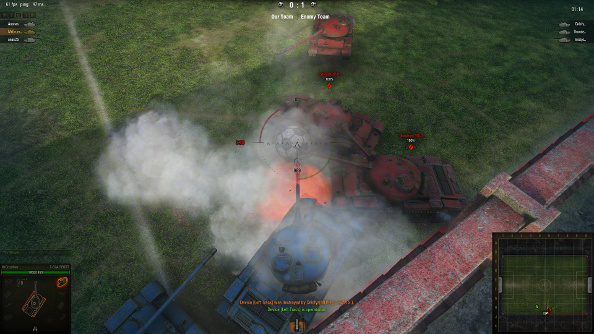 Everyone just piles onto the ball, firing rounds at both the bouncing orb and each other. There’s no destruction in this mode, though tanks can be knocked out temporarily with a well-placed shot. Never for more than a few seconds, though.

But since this is still World of Tanks, tactics inevitably evolve.

Defensive moves are common, with players using their vehicles size to block the ball. They’ll turn and squash the ball up against one of the walls, or pen in an enemy so that – even if they have control of the ball – they can’t move anywhere. It’s as much about controlling the movement of the opposing team as it is directing the ball itself.

And you can shoot the ball too. Of course you can. The ball, like the tanks, is completely indestructible, but the point of shooting it is to control it from afar. Though the physics can be a little crazy.

I decided to be a goalie a couple of times – I hear that’s a class in the game of football. I’d hang around the goals, waiting for a sneaky bugger to charge up, ball out in front, and then I’d fire. It never failed to amuse me to watch as the ball smacked off the tank or launched into the air, flying off in another direction. Then the chase would begin.

It has all the hallmarks of a great sporting event: the competition, the close calls, the fouls (though ramming and shooting the other team is encouraged), the screams of anguish and cheers of delight. The only difference is that it’s tanks instead of players, and that’s a big, wonderful difference.

The only downside is that come the end of the World Cup, we’ll have to bid farewell to this wonderful mode. So get in while the going’s good.