“Worms games are not all born equal,” says Team17 creative manager Kevin Carthew, who ought to know – he’s worked on them since the ‘90s.

“Some have lived long in the memory. I think we’ve sometimes failed to hit the heights that certain Worms games have.”

Worms: WMD is another iteration that pulls liberally from the past. But it’s selective, taking its cues from the version that still prompts the most frequent and fond anecdotes: Worms Armageddon. And it’s silly. There are jumping tanks. 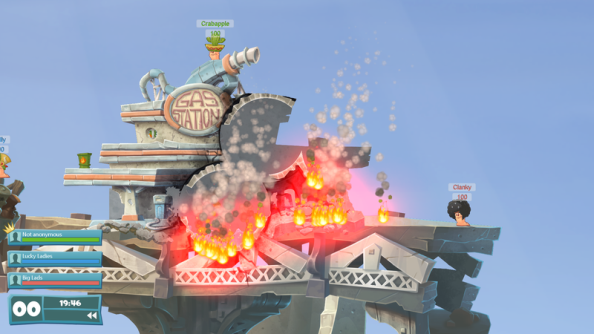 Not every turn-based Team17 outing gets the same start in life. Some embellish the engines of existing entries in the series. But WMD boasts a brand new one, built to replicate the particulars of the 1999 fan favourite.

“It’s something that’s hard to get across in pictures or in videos,” says Carthew. “It’s very much how it feels in the hands – and certain versions of Worms just have a feeling of weight and solidity to them. They’re faster, they feel a little bit more immediate, they’re a lot more satisfying to play.

“It comes down to a collection of all sorts of miniscule things, like the feeling of a grenade when it bounces off a surface or the satisfying thud of watching a squidgy pink cartoon character get slammed against a wall and then kind of drip down it.”

It certainly feels familiar in the right ways – and there’s an impact to the way the landscape caves in under the downward force of a concrete donkey that inspires grimacing and laughter around the table at Team17’s Wakefield office. But those unfortunates plopping into the ocean – is there something different about them? 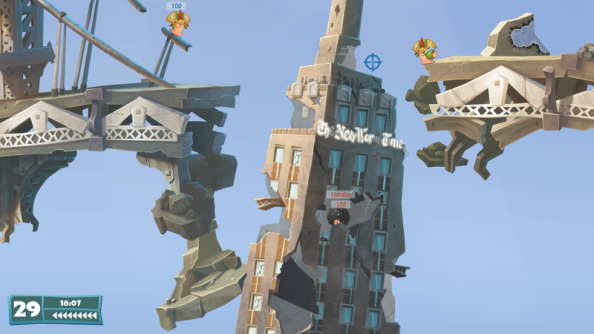 It turns out the studio have redesigned the worm for the first time in decades. While still podgy and cute, their features are more angular and electric, in a fashion inspired by contemporary children’s cartoons.

“I think it’s that craze that started with Ren & Stimpy, where kids’ shows grew up a bit and appealed to adults at the same time,” says Carthew. “There’s something about them – it’s those clean, hard lines, those slightly crazy characters.”

It makes sense: Carthew reckons Worms’ various versions on iOS have brought in a new generation of players. But the levels look markedly different too – better-curated and more detailed.

Since the series’ inception, Worms has randomly generated its blobby landscapes, coloured them with repeating textures, and plonked a few thematically appropriate objects on top. In WMD, by contrast, all of the art is hand-drawn.

“Some of the games in the past have had custom landscapes where we’ve just given an artist free rein and said, ‘There you go fella, draw what you like, just give us the most beautiful picture’,” explains Carthew. “That’s when the game looked at its best. This is how we want to the new game to look all of the time.” 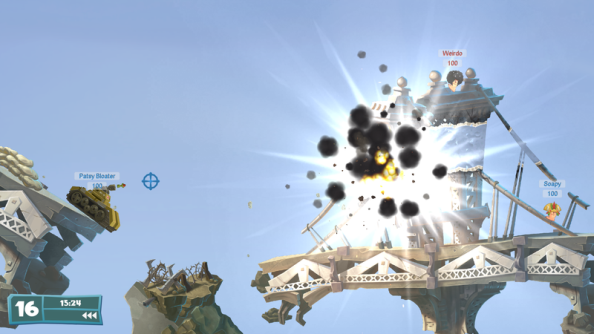 The solution has been to draw many, many small-scale art assets – gas stations, broken bridges, dilapidated towers – and stitch them all together. Watching the new terrain generator in action, I can see it piling sketches one on top of the other – cycling through the library to find good fits, until the map is complete. It’s like madcap drystone walling, capable of twisting art into caves and islands when wanted.

Some of those assets are buildings. Team17 have experimented with forts in the past, but these don’t offer immunity from enemy fire – rather concealment. When you enter a skyscraper or hot-dog stand, the walls fade to reveal the passageways inside. Your online opponents won’t see your exact position unless they also have a worm inside the building – so might have to take a few potshots before one connects.

Clearly, the hot-dog stand is just fun: it doesn’t offer much in the way of protection. But other structures, like a sizeable New York newspaper office, can be hotly-contested.

“It means that certain areas of the landscape now have more strategic importance,” Carthew expands. “It’s very advantageous to hold one – you can lay siege, or you can try and keep intruders out.” 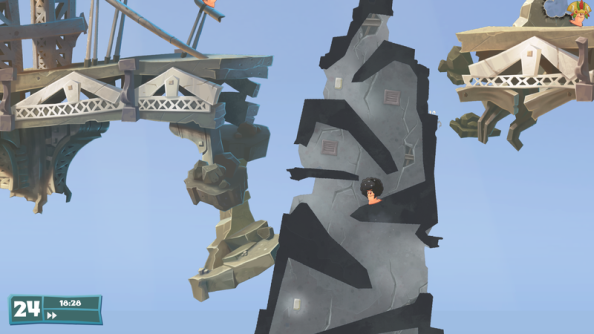 Extra artillery can aid with that. One building on the map we played boasted a mounted machine gun on the roof. And WMD has a whole other toolset in vehicles.

If you’re lucky enough to spawn near a tank, or handy with a jetpack, you can clamber inside with a key press. Vehicles offer damage mitigation and high-powered weaponry – in the tank’s case, a repeater cannon that fires a series of shots in quick succession and ends your turn. But they’re not always the best option: another worm only need shuffle over during their turn to turf you out.

Vehicles can jump, which feels pleasantly silly and makes maps a bit more navigable. But in our matches, they tended not to wind up too far from their spawn points before they were exploded – jettisoning their pilots high into the air – or more often, bazookered into a watery grave. They rarely felt like the focal point of battles.

Carthew talks about taking advantage of vehicles to negate fall damage and avoid losing your turn – and the skill involved in adjusting tank fire to chase a tumbling target down. I didn’t witness that new strategy, but perhaps that’s because we fell into old patterns – a nostalgic muscle memory that had us reaching for the baseball bat or launching Super Sheep instead. 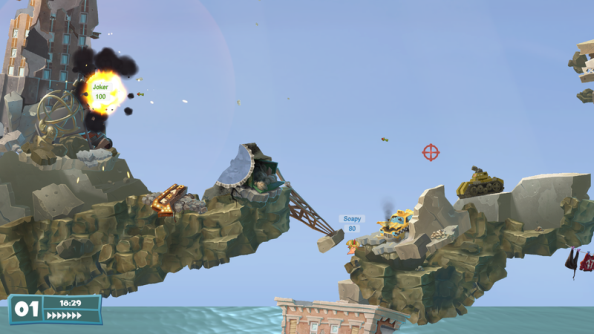 It’s easy to imagine that buildings in particular might find their most comfortable home not on Xbox One but on Steam, where your opponent is likely more competitively inclined and – crucially – not looking over your shoulder at your position.

It’s too early to say how that’ll play out. But goodness me, it did feel right in the hands. If the new kit winds up feeling equally as good, then bring on armageddon.