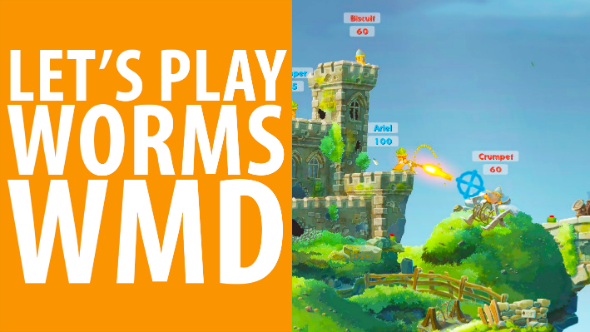 Worms is basically the Bruce Springsteen of videogames. Nobody dislikes Worms. Most people have a few good stories to tell about their time with it, and for many the very mention of the words sends them a bit misty-eyed. Phil and Jeremy are two such characters, both having spent various portions of their time on this planet refining ninja rope technique and learning optimum grenade fuse timing. Watch as they get to grips with a new one, Worms W.M.D.

Worms like sand. If you do too, try our favourite PC sandbox games.

The first few rounds are hardly a masterclass, granted, but with the addition of vehicles and sentry guns there’s a lot to get your head around. Still, at least the squeaky voices haven’t changed much since Worms 2. That’s reassuring.

It turns out to be something of an epic, though, as Phil’s dark side tactics prolong the match beyond any earthly lifespan and Jeremy’s inherent sense of fair play stops him from just carpet-bombing Phil into oblivion like he deserves.

If you like this sort of thing, you’ll get something out of subscribing to PCGamesN on YouTube, we reckon.