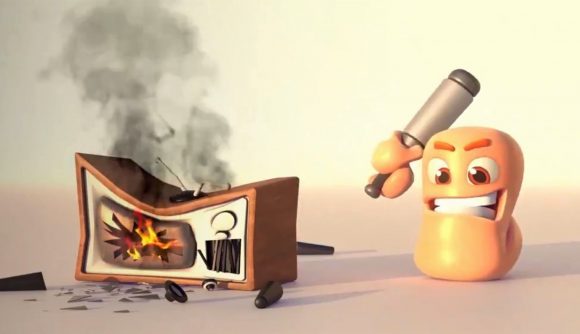 Ah, Worms. Team 17’s turn-based strategy series that gets adorable little pink menaces firing everything from holy hand grenades that sing out ‘hallelujah!’ before detonating to explosive grannies at eachother, all to be the last invertebrate standing. It’s been around since 1995 – and it’s about to get another instalment.

That’s according to the developer on Twitter in a post that announces: “Incoming! Get ready for Worms like you’ve never played before!” along with a teaser trailer (which you can take a gander at below). It’s tantalisingly free of detail on what exactly is coming, but the studio does hint: “Things are getting real in 2020”. Hmm.

The trailer does offer a little recap of the some of the series’ 2D history, with appearances from the original Worms and Worms 2, as well as the more recent Worms 3 and Worms 4 titles. Clips of these are interrupted by one of the eponymous little grubs smashing the TV they’re playing on with a baseball bat – before one of those pesky holy hand grenades shows up. The explosion simply reveals: “2020.” Hmm.

So, it’s not clear what’s on the way from the teaser – whether it’s a Worms 5, a remaster, or something else – but it’s fair to say fans are hyped, judging by comments below the tweet. Plus, many are guessing that it’s another 3D title based on the clip – though it’s too soon to say just yet.

Get ready for Worms like you’ve never played before!

Things are getting real in 2020 – more details coming soon… pic.twitter.com/pgzXhUmFiX

If you’re excited to find out what Team 17’s got in store for the future of Worms, it looks like you won’t have to wait too long to hear more – the tweet says: “More details coming soon…”

In the meantime, check out our list of the best strategy games you can play on PC right now – you know, to whet your appetite until you can blast enemy worms with bazookas once again.