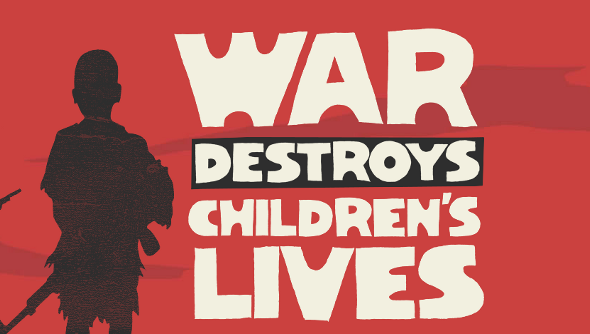 While Wargaming.net is best known as a purveyor of addictive, skill-based tank, plane and ship combat games, it recently showed its softer side when it joined War Child UK in securing the safety of children in regions threatened by conflict through the Real War is Not a Game campaign. War Child is an international charity with teams in Afghanistan, Iraq, Uganda and other nations affected by war where they provide aid to child soldiers, homeless children, kids that have been locked up in prison and girls at risk of rape.

Back in September, Wargaming sold three charity packs to their customers, promising a quarter of the sales to War Child UK. This has amounted to €100,000, which Wargaming recently presented to the charity. This sum won’t just protect children from the immediate effects of war – it will also be put towards education, helping families and giving young adults the opportunity to learn skills that will allow them to earn a sustainable income.

The plight of children in so many war-torn areas of the world really is desperate, so it’s a more than worthy charity, and it’s good to see a large organisation like Wargaming highlighting this significant issue and investing in protecting those that can’t protect themselves.

“Our campaign Real War is Not a Game is intended to make sure that even whilst children in safer countries play games that involve war and conflict, they will be able to understand more about the realities of war facing children in other places. We do not aim to stop all games involving conflict. Rather we want to use the power of these games to educate huge numbers of people about the realities of war, and to mobilise them to use their energy and creativity to support children who are stuck in a real conflict zones,” says War Child CEO, Rob Williams.

War Child has previously worked with SEGA and Activison, and if you’re interested in the work the organisation does, you can learn more here, as well as make any donations. For more information on the Real War is Not a Game campaign, read up on it here.