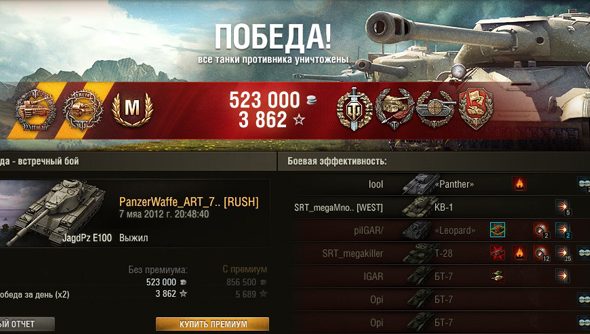 Call it a hunch, but I’m pretty sure that the same kind of people that obsess over tanks, and the modules that you can put in them, with all their fancy names and ever-so-slightly-different model numbers, are going to also be the sort of people that really enjoy getting a detailed breakdown, in stat form, of everything that just happened in the tank-based carnage of a World of Tanks match. Wargaming.net seems to agree, which is why the 8.0 patch is going to bring a completely overhauled after action report.

Once the patch hits, you’ll be getting all sorts of lovely information like how much you contributed to a kill, whether it be spotting, critically crippling, damaging or outright destroy an enemy tank. Not only that, but there’s also detailed readouts of shells fired, damage dealt to both allies and enemies, mileage, and pretty much anything else you can think of that can be quantified over the course of a game of World of Tanks.

Looking forward, Wargaming.net is aiming to revamp the chat system, both in the match and after it, so that you can bask in the collective glory of everyone who thought that one shot you made was really bloody good, righto. As much as Wargaming.net has done wonders with the game itself, the backend has always been a little clunky, so it’s excellent that they’re starting to bring that up to speed too. And stats, and so many of them, are a good way to go to appeasing a burgeoning community that is thirsty for more reasons to involve themselves in the game.

The update itself doesn’t have a release date, but it should be hitting sometime in the next few weeks.