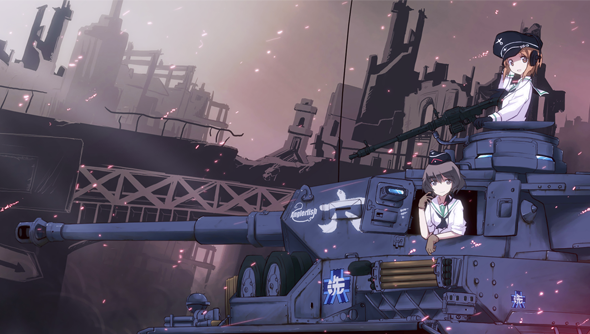 May brought the news that Wargaming were opening a new studio in Tokyo. The team were to be focussed on customer service but we suggested there may be some Japanese content in development as a way for the developer to court local players. Well, something like that’s been announced but it wasn’t quite what I was expecting. Wargaming have announced a collaboration with the anime series Girls Und Panzer.

The nature of the collaboration has yet to be announced. It may be as simple as some novelty tank skins or maybe something more developed, a full anime-style shader pack to make the game look cel shaded. Maybe even more, it could be that, as well as a visual overhaul, factions from the cartoon may be made playable.

Currently we know only Akiba Souken are reporting the deal and the Anime News Network are claiming that’s what Souken are saying (my Japanese is about as good as my French. Which is to say, awful).

The Japanese version of World of Tanks is currently being localised and the plan is to have it released on 5 September.

Oh, and if you’re not familiar with Girls Und Panzer, after watching 10 hours of this you should be up to speed:

One canny Youtuber had already envisioned a crossover of the two titles: