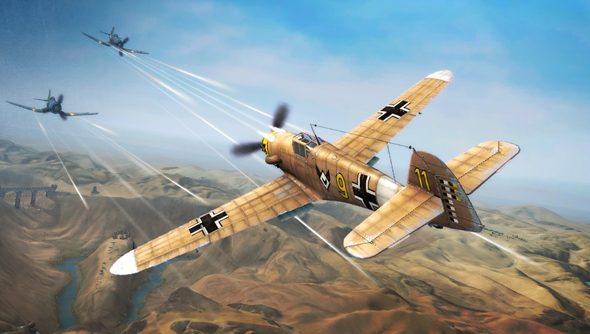 Four years ago, Wargaming released World of Tanks – and subsequently began expanding in a fashion that positively encouraged lazy invasion metaphor. Their armour rolled across continents and set up new outposts in each. Their troops parachuted into North America – capturing Chris Taylor’s Gas Powered Games and MechAssault types Day 1.

In that time, they’ve also made another game: World of Warplanes. But tracked vehicles, not winged ones, continue to fund the overwhelming majority of the company’s enlargement.

It turns out Wargaming are fine with that.

Asked whether World of Warplanes had struggled to “take off” by a PCGamesN editor since arrested on a pun charge, Wargaming’s European general manager offered some perspective.

“It’s always funny when I hear that question,” said Rinaldo Andreolli. “Some voices internally might have thought the same or said the same, but this comes because everybody’s comparing World of Warplanes to World of Tanks.”

While World of Tanks boasts 80 million registered users, World of Warplanes has only 8 million. But as Andreolli pointed out, that’s not really an ‘only’ scenario.

“That sounds like, ‘Okay, that’s only ten percent of World of Tanks’,” he said. “But if you look at the gaming industry, who would not kill for having 8 million registered users? And we have that.

“We might not call it a big success, but for any other gaming community, that is a huge success, and we’re very happy about the success of Warplanes.”

Andreolli noted that Warplanes featured a more “Western-world oriented theme” than World of Tanks – whose Eastern European audience makes up a large proportion of its playerbase.

“The vehicle of choice in the Eastern European countries and Russia is definitely more on the tanks,” he said. “The planes are more in the Western world and I’m curious to see what it’s going to be with Warships.”

Have any of you lot given World of Warplanes a fly, as it were? I wonder if War Thunder has taken a chunk of its potential playerbase.