Blizzard have recently sent round a press release teasing a reveal of sorts at PAX East next Friday. Quashing any immediate assumptions, Blizzard stated that it’s “not a sequel, expansion, or that rumored next-gen MMO” but instead “a little something different from our other games. This news could also be connected to the recent departure of Jay Wilson, who left the Diablo 3 team in order to lead another Blizzard project.

We’ve always known that Blizzard have some other developments hidden away, in addition to their three flagship franchises. Project Titan, the rumoured next gen MMO still completely shrouded in secrecy. Starcraft: Ghost, the first person shooter set in Starcraft universe. Blizzard All-Stars, the MOBA title is still to see the light of day.

Here is the full email: 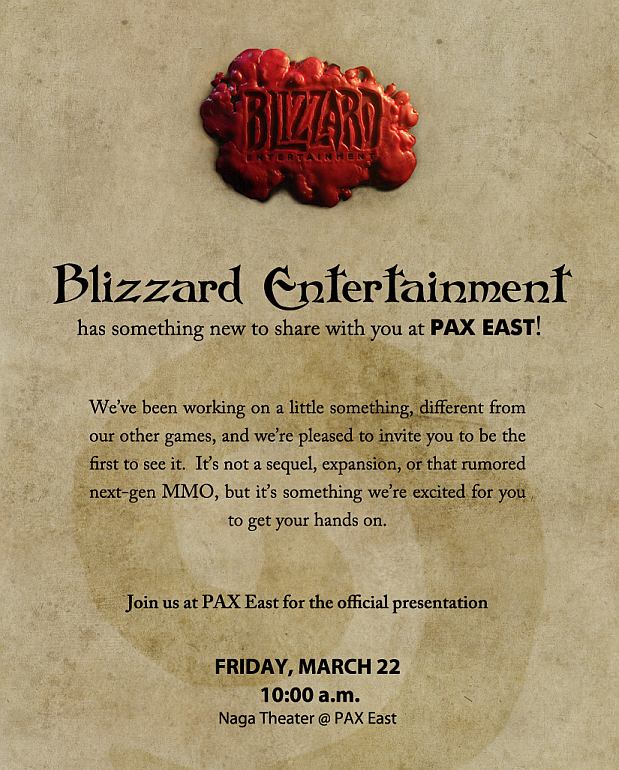 Interesting stuff, already we can exclude Project Titan and Starcraft: Ghost from the possible contenders. Blizzard All-Stars is probably the most likely, especially with Heart of the Swarm recently being unleashed onto the world. Some of the community however also anticipate some sort of mobile game.

This remains pure speculation however, as we won’t know for sure until Friday, March 22nd.