Blizzard’s mighty CCG is out now; read our Hearthstone review to see what we thought of it.

The dev team for Blizzard’s upcoming card game had a few unexpected announcements about the game’s future, but, for the most part, they had the least to show at BlizzCon today.

It makes sense. The game is on the verge of an open beta release next month and they’ve shown pretty much everything that will be in it.

But they haven’t shown a lot of what won’t be in it, like the cards that got cut during the design process. The dev team wanted to show the audience just how experimental they’d gotten with some of the cards they made, and these pretty much prove their point. 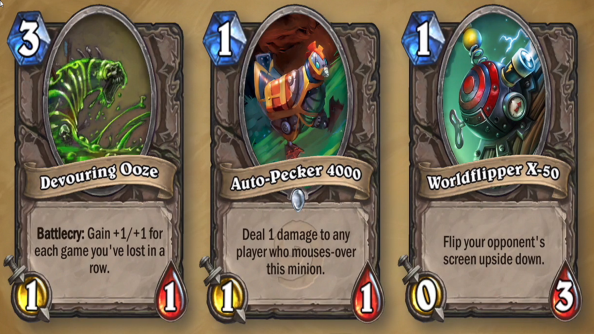 Confession time: I secretly love the idea of the Auto-Pecker 4000, but only if it opens up the opponents mic channel, so you can hear them curse every time they accidentally mouse over it while trying to select the creature next to it.

I can totally understand why Hearthstone doesn’t want these cards–the game is built on the principle of being accessible and non-punishing, even when losing. But it’s fun to see the extremes they were willing to play with, when it comes to pushing the boundaries of what we can do in digital card games.

I can’t wait to see where creative dev teams like Hearhtstone’s take this genre. There’s so much potential for crazy new mechanics like these.