Playing Heroes of the Storm at PAX, it doesn’t feel like any other MOBA I’ve ever played. For one thing, I’m actually winning.

For another, it just feels less like something derived from an RTS and more like something I’d expect to play on an arcade cabinet somewhere back in the 1980s, or on a console in a friend’s basement in the late 90s. It’s Blizzard’s Smash Brothers, their Gauntlet and it’s a fresh take on the MOBA that steps out Dota’s long, long shadow.

To hear Lead Producer Kaeo Milker tell it, Heroes of the Storm is the answer to a wish-list Blizzard have been compiling for years.

“With a genre like this, it kinda had its roots in our communities — with things like StarCraft and Warcraft 3 — and I think we all kinda had our ideas of where these things could go. And over many years, they didn’t always go there. So for us, it’s all about making that game we want to play.”

It’s also a chance to put Blizzard’s most iconic characters back into the battle. Blizzard plotlines are not kind to fan favorites, with heroes being corrupted and villains being slain at the blinding speed of plot. In Heroes of the Storm, they can all be reborn for one more fight.

However, Milker and Blizzard don’t just want to drop these characters into the familiar tri-lane grind, but explore other possibilities.

“What do we want to do with those characters? What is our canvass that we want to play with them on?” Milkers says. “Battlegrounds is a really big part of that. Traditionally this has been a genre about one map, and that’s kind of been the ‘one map to rule them all.’ We wanted to challenge that and say, ‘What if every map was unique, with unique side-objectives and missions that really vary the gameplay a lot?’”

I experienced some of that first hand during my turn on the Haunted Mines map. After putting the under-achieving AI bots on the back foot (everyone who left that PAX East booth probably felt like they were ready to go pro), I led my team down a mineshaft into a completely separate dungeon. Now there was fighting on the surface over towers and gates, and a close-quarters battle between teams and AI monsters down in the mines.

After slaughtering a bunch of the enemy team, along with several waves of ghost-miners, we killed a giant ghoul, then retreated to the surface to get our Grave Golem — a powerful minion that could give us a huge edge in taking control of the map.

It was an interesting twist, with our team splitting its focus between the lane-pushing on the surface and winning the melee in the mines. But what I liked even more, however, were the jungle creep camps.

While my team stalemated against a fortified gate, I detoured into the jungle to kill two troll mercenaries. They immediately respawned as allies, and followed me around like two big, dumb catapults.

Their presence on the battlefield was so immediate that I became the the point-man for my team’s assault, fighting on the front line to keep enemies away from my troll-buddies. They also let me change my role in the game, turning my Jim Raynor from a sniper into a mobile siege unit. It was nice being able to redefine my character on the fly, both through the AI allies and by making choices on the talent tree.

In what is almost certainly going to be Heroes’ most controversial feature, however, all experience and leveling happens across a team. So even though it was my Jim Raynor and a teammate’s Zeratul who were ripping through the enemy team, we were all hitting new levels together. I may have been the team’s number one or number two headhunter, but I wasn’t outpacing them in terms of damage or usefulness.

I don’t entirely know how I feel about this. On the one hand, it does make Heroes feel like more of a team-dependent game, without the baggage of being a feeder or carrying. On the other hand, it’s nice to be rewarded for having a great game by becoming bigger and badder than everyone else.

That’s a tradeoff that may be worth making, according to Milker. 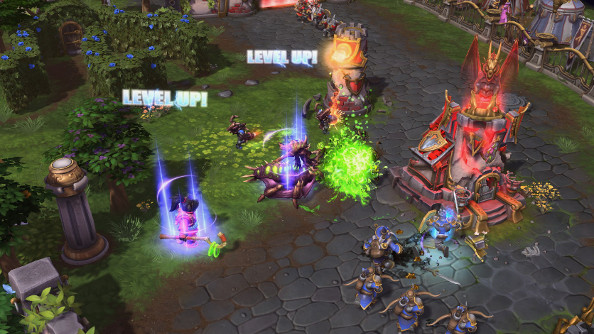 “You can do things that wouldn’t be viable at all when you were just individually leveling heroes,” he says. “A hero like Abathur, who’s not on the battlefield, who’s not getting kills directly himself, he’s not getting experience — he’d be worthless in a game with individual levels, because he’d be so low-level he’d be pointless. But in our game, because everyone is leveling together, a crazy hero like Abathur is suddenly a real hero and can have a significant role.”

Breaking out of the traditional mold has allowed Blizzard to redefine what make a useful MOBA character. Milker gets really excited talking about Murky the murloc, a hapless but well-known character from World of Warcraft.

“He’s a goofy character, a silly murloc,” Milker says. “So we couldn’t just make this powerful character just to make the game work. So what would a murloc really be? He’d be really weak. He wouldn’t do a lot of damage. He would die all the time. And he would suck, basically. So how do we have a hero that basically sucks?”

That premise may not sound enticing, but Blizzard’s solution definitely does. Murky doesn’t have a lot going for him, but the one thing he does have is the ability to lay eggs, like a good amphibian should. Those eggs are the key to winning as a hero who sucks, apparently.

Milker continues, “So Murky lays those eggs, and then he charges into battle. And he does a little bit of damage. He’s kind of annoying, he slimes his enemies, he does some damage-over-time and has some bombs that are good against structures. But he doesn’t do much damage. What he’s got going for him is that he’s super persistent. Another hero will come in and slam him down and kill him. 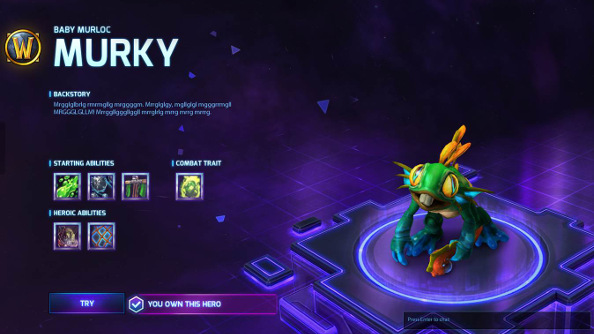 “And almost instantly, Murky will respawn at his egg and come right back. And you kill him again. But you do this a couple of times, and the little bit of damage that Murky is doing starts to add up and eventually he wins the war of attrition. Wears you down, kills you, and starts making significant progress. So on the other side, you start looking for his egg so he goes on a regular respawn timer.”

These are interesting and off-the-wall ideas. If breaking with MOBA tradition can open up so many more options for creative map and hero design, then I’m completely onboard. But I wonder whether the competitive MOBA community will embrace Blizzard’s vision.

Milker is not too concerned. “We’re trying to make a fun game. That’s always our main goal. We are making decisions to support things that would make eSports an option,” he adds. “We’re trying to do something like what we did with StarCraft , where the tools are there, but it’s really going to be something that is the choice of the community. If that’s the kind of game they want to see that way, we’re going to support that and continue building tools for it. But it’s not our main objective.”

Heroes might be difficult for some seasoned MOBA players to embrace, but I suspect its fast-pace and almost arcade-like controls will help it find a new constituency. It is a multiplayer game that seems so fast-paced and lighthearted that it hearkens back to local multiplayer and LAN parties.

That’s only fitting. It’s the place most of Blizzard’s Heroes used to rule.