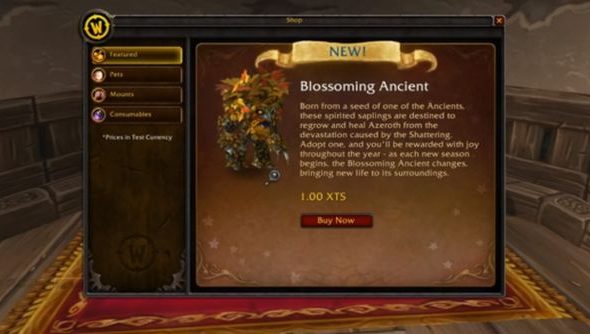 WoW’s 5.4.2 patch is going live this week. It’s mostly tweaks, plus a little groundwork for some welcome cross-realm functionality. But regulars in the game’s test realms briefly spotting something much more notable: a fully-featured in-game store for mounts.

That’s not a store in which your mounts can peruse fresh grass cuttings or barter for hay, I should clarify, but a shop in which you can purchase new rides for your characters. It’s already disappeared in the latest test realm build – so it’s unclear whether it’ll appear in 5.4.2 or sometime later.

In the below video, MMO Champion buy a Blossoming Ancient. The store refers to a ‘test currency’, so it’s impossible as yet to know how much each mount will be. But the placeholder cash also suggests the store is in beta at Blizzard as we speak, with presumably a test realm preview to follow.

The ‘consumables’ visible as a menu header on the left of the store browser look very much like XP boosts.

It’s a store not too far removed from those found in other, sub-less MMOs, then – but don’t read this as a sign that Blizzard will be making the final leap to free-dom. At Blizzcon this year, studio head Mike Morhaime dismissed the idea of a free-to-play WoW.

“We’ve always taken the business model on a case by case basis,” he said at the time. “In the case of World of Warcraft, the first 20 levels are free. It wasn’t designed as a free-to-play game. I don’t see that type of transition happening in World of Warcraft, although we are always looking for new ways to make the game more accessible.”

Is this the way to do it, do you think? Or should the mount remain a status symbol free from the influence of real-world money?