While revealing the first details about the long-traveled World of Warcraft feature film, Blizzard and movie industry representatives gave a clear message: this isn’t for kids.

The film’s special effects supervisor Bill Westenhofer (The Chronicles of Narnia, The Golden Compass) was the first to strike when a player asked what the tone of the movie would be. The player suggested The Chronicles of Narnia or The Patriot as examples, but Bill already knew his answer. He quickly said “Gladiator. It’ll be dark, dirty, and gritty.”

The team emphasized that the general armor style of World of Warcraft would try to be preserved as much as possible, but Westenhofer, a long-time WoW player, laughed at some of its oddities. For example, there are no scabbards in any of the armor, so weapons simply often vanish in-game, which obviously won’t work in a live-action movie.

Director Duncan Jones jumped in to add that some of the pauldron design would cause actors to knock themselves out when trying to reach something off their back. They did say that the digital characters, like the motion-captured orcs might sport more exaggerated armor, but that it would need to feel realistic in their gritty live action world.

The team also described the film as a “war movie” where the two leaders of the orc and human civilizations (Durotan and Lothar) are staring at an impending war that neither of them want, but feel compelled to protect their people. Duncan marveled at the complex topics they can tackle in a war movie that presents the conflicts from both sides, and implied that there would be some very heavy moral conflicts explored. 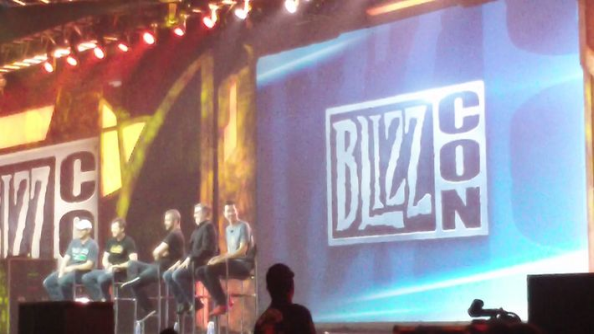 When asked about the actual rating the movie would be aiming for, Westenhofer said they’re aiming for PG-13, noticeably lower than the R rating of Gladiator. Duncan quickly jumped in to say that the threshold for ratings has been pushed up a lot recently, and Gladiator was released in 2000.

He pointed out that the dark Batman movies are all PG-13 and specifically called out the infamous Joker’s “magic pencil” scene, where the Joker puts a pencil, tip up, on a table and then smashes someone’s head onto it. He followed it up with a smirk and a very revealing quip: “You can get away with some shit in PG-13.”

The crowd erupted into cheers, indicating that even among a playerbase that enjoys the cheerful aesthetics of WoW, there is a huge appetite for a dark, gritty, and serious movie. The studio will start filming next year, aiming for a late 2015 release, and Duncan said that the movie would be likely be previewed at next year’s BlizzCon. 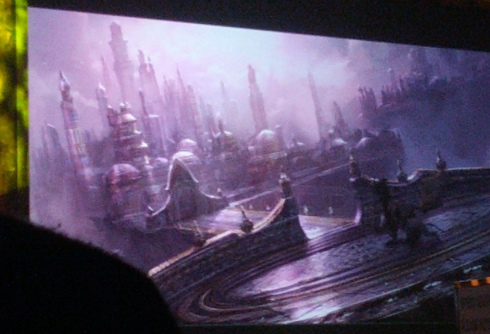