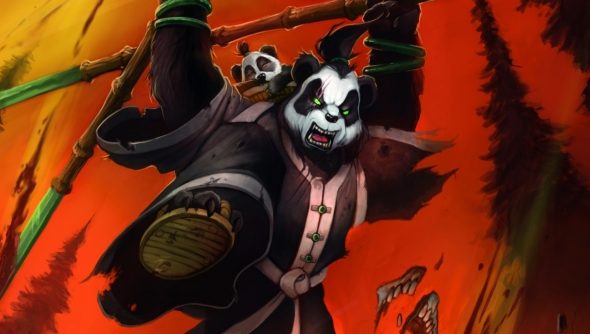 All MMOs suffer from population problems, it’s part of the trouble of having “massively” in the title, and there’s none more populous than World of Warcraft. Blizzard’s behemoth has player trouble at each end of the population spectrum: some areas are unpopulated, while some areas are obviously over-populated. They’ve come up with an amazing solution that’s just going live in the Mists of Panadaria beta: Cross-Realm Zones.

The biggest problem, according to Blizzard, is: “For many years now, the significant majority of the player population online at any given time has consisted mostly of characters at or near the level cap. This has resulted in an environment where characters that are leveling up experience a world that has fewer other players to interact with than what the world was designed for.”
So people rarely return to an area they’ve already cleared, leaving lonely lower level players lost in the wilderness. The solution works some server side magic so that those zones that are particularly devoid of players will allow players from other realms to mix together: realms with people low numbers of playing in the same area on each will temporarily merge the players onto one server. Imagine a giant monkey interlocking his fingers together, which is the best analogy ever. The mixing of players will enable you to group and quest. And while the transition is seamless and automatic, you can deliberately group with players on your Real ID list if they’re in the same faction. You need never be lonely again.
The same system will also give heavily populated areas an overflow into other realms, so when a new class is launched and the opening areas are particularly packed, it’ll spread the load over multiple servers, seeking realms with space and placing players there.
Functionally there are a few questions that Blizzard already have answers for. Loot is shared in the same fashion as a single server group. What happens when you’re done with the area? Does your group get torn apart and cast back to their home realms, each player reaching out as their fingers part and their grip loosened? Nope: “Your party won’t be disbanded when you move through different zones, though if you’re not in the same home realm, you won’t be able to see each other if you’re in separate zone instances.” So you’ll be free to wander the world beyond the demarcated zone with people you might befriend. But you won’t be able to enter each other’s capital cities or auction houses.
It’s a remarkably slick and thoughtful way of allowing the game to continue without drastic measures, like dreaded server merges and closures. It’s also an interesting glimpse to how Blizzard plan future MMOs: World of Warcraft has always been too large to allow the game to exist on single shard, ala Eve Online, but doing it this way means they won’t really have to worry about that. Essentially it won’t matter where you are, you’ll probably be able to play with friends no matter what.