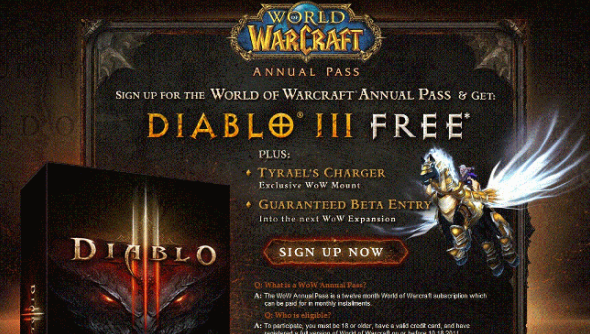 
very good deal. Those year-long subscriptions are now coming to a close.
So: I asked Greg “Ghostcrawler” Street, World of Warcraft’s
lead system designer, is Blizzard facing a wave of WoW players cancelling
their subscriptions?
The answer: probably not.

“I don’t think a lot of players got annual
pass because they thought ‘Oh, I’ll see what World of Warcraft is like
and here’s a great time to try it out’, says Street. “I think those
players would more gravitate to a one month subscription or a trial
or something. I feel like with Annual Pass, it was about reaching the
players we already had and stick around, and try Diablo.”

The reasoning, from Blizzard’s perspective, was
to let players dabble in Diablo, without cutting out on their WoW time.
“We thought what Annual Pass would allow them to do is say ‘Oh,
I can play both games, but I don’t have to make the hard money decision
which one to play.'”

The offer was a success, says Street. “I was
sitting with Mike [Morheime, Blizzard’s CEO] at Blizzcon when we announced
it. I remember when we said “Right… now…” We started watching
the numbers go up from that moment.

Which begs the obvious question: is it going to
be repeated, for, perhaps, the forthcoming launch of Starcraft II: Heart
of the Swarm? Probably not.
“I don’t know that it’s the kind of thing we
would do with the Starcraft launch…,” Street added. “It worked
out well for us, but we don’t have anything we’re about to spring on
players.

{"schema":{"page":{"content":{"headline":"As World of Warcraft’s annual pass expires, Blizzard dev unconcerned at prospect of players leaving: “it was about reaching players we already had”","type":"news","category":"world-of-warcraft"},"user":{"loginstatus":false},"game":{"publisher":"Blizzard Entertainment","genre":"MMO","title":"World of Warcraft","genres":["MMO","RPG","Subscription"]}}}}