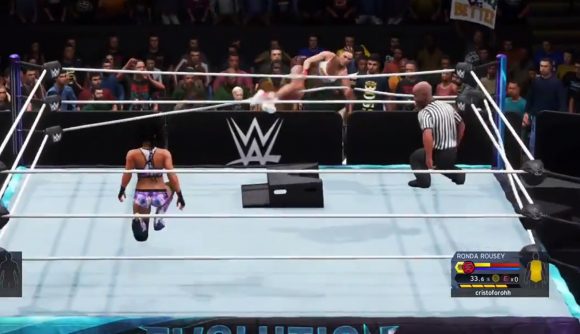 At this point it’s well established that WWE 2K20 is an astonishingly broken pile of man-meat and rifts in space-time, and while that makes for plenty of fun comedy content for social media, it’s less funny for the folks who have shelled money out to actually, you know, play a wrestling game. Publisher 2K has heard the cries of the wrestling broken-hearted, and has committed to a fix. Well, a series of fixes.

Check this out, because the company has chosen an interesting wording to describe this ongoing disaster.

“We are listening closely to the feedback that’s been shared regarding WWE 2K20 and are aware of the concerns some players are reporting,” 2K says.

‘Some players’ are ‘concerned’ about WWE 2K20! Perhaps something is wrong.

“We’re working hard to investigate these concerns and address them as necessary,” 2K continues in the tweet from the official account. “We expect to have an initial patch ready in the next two weeks, with others to follow.”
In other words, 2K does understand that the ‘concerns’ players have raised constitute some serious problems, which are going to take a lot of work to correct.

Again, we’re talking about this game:

It’ll be interesting to see whether 2K can right this ship, or whether they’ve just launched a game that will primarily be remembered more in memes than on hard drives.

For players who have already purchased WWE 2K20, it’s a matter of waiting to find out whether the game they bought will at some point resemble actual wrestling.