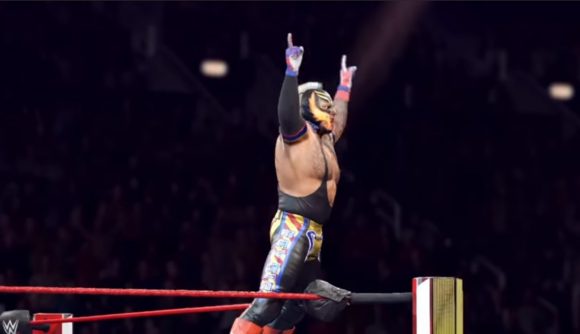 WWE and 2K are making another wrestling game. WWE 2K22 was officially revealed during this year’s WrestleMania, and it’s coming soon.

A short trailer was shown during the pay-per-view, featuring legendary cruiserweight Rey Mysterio. Footage jumps from him in real life, putting on his mask, and him in the game, doing a 619 on Cesaro, and then building some hype from the turnbuckle. This is all “captured from a work-in-progress build”, and it looks as good as the snippets in these trailers always do.

No release date, but since 2014, 2K’s main series of WWE games have all launched in October, so that’d be a safe bet. The reception to the teaser seems positive, going by the reaction on YouTube. The latter half the 2010s were bad run for WWE 2K games, and the last couple, 2019’s WWE 2K20, and 2020’s WWE 2K Battlegrounds, were heavily criticised in particular. WWE 2K20 was slated for being a broken, glitch-ridden mess, to the point a Twitter campaign was started asking 2K to fix it. 2K acknowledged the problems, and it’s believed the poor reception was a heavy contributor to the cancellation of WWE 2K21.

Hopefully the extra year helps this one fare a little better. Earlier this year, developer Visual Concepts said it’s taking the “best ideas” classic wrestling videogames like No Mercy. Whatever happens, we have that AEW game to look forward to as well.