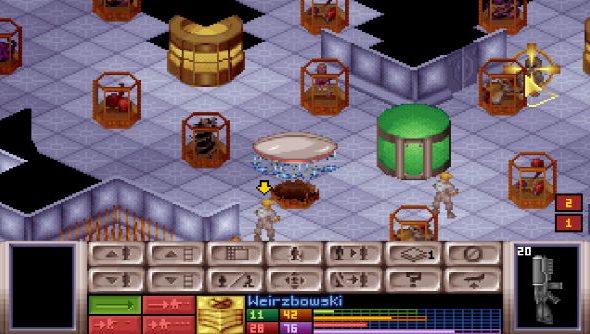 “I imagine they might exist in massive ships, having used up all the resources from their home planet,” says theoretical physicist Stephen Hawking in his 2010 documentary, Universe. He continues: “Such advanced aliens would perhaps become nomads, looking to conquer and colonise whatever planets they can reach.”

If videogames have taught us anything, Hawking is on the money here. If aliens do ever descend upon us from the heavens above we can expect a fight. Not to worry, though, because videogames have also taught us that we, as mere mortal human beings, are well equipped if such an extinction level event should occur. Who you gonna call? The Extraterrestrial Combat Force, of course. That’s X-Com to you or I.

In his formative years, X-Com mastermind Julian Gollop played board games. In a world pre-personal computers, he’d spend hours poring over chess and backgammon with his father, before graduating to fantasy tabletops such as Dungeons and Dragons and the wargame offerings of Avalon Hill and SPI. “We didn’t watch TV,” says Gollop. “We played board games.”

His introduction to computers came in 1982 courtesy of the Sinclair ZX 81 – a machine that packed just 1K of RAM, prompting Gollop to opt for a 16K RAM pack immediately after purchase to make it more usable. He taught himself programming whilst still at school and had a penchant for implementing the types of tabletop games he enjoyed in his spare time – a career he’d considered pursuing prior to the advent of desktops. In 1983, he acquired a Spectrum and set about creating his first title: Nebula, an ambitious resource-building galaxy exploration game. 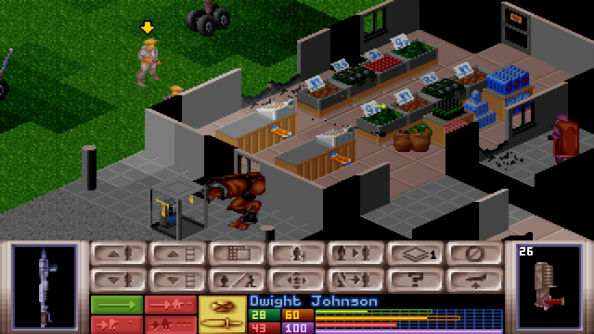 From hereon, Gollop was keen to chase a career in game design. After starting a small venture with his father and his friend, he eventually convinced his brother Nick to join him after finishing university. Whilst his friend at this stage dropped out, his father thereafter assumed a financier role. Mythos Games was formed and in 1984 released its debut title Rebelstar Raiders for the Sinclair Spectrum – a simple single-player turn-based tactical game.

A sequel followed in 1987, which added features such as a scrolling map and second-player compatibility, and Laser Squad followed that in 1988 – Mythos’ most ambitious project to date, which incorporated a line-of-sight system, destructible terrain, and multiple scenarios.

This proclivity towards the strategy genre, not mention Mythos’ vision and talent, laid the foundations for one of the biggest, most revolutionary games in history.

In 1991, Mythos released a demo for Laser Quest 2 on the Atari ST before pursuing a publisher – a company that they hoped would nurture the project. MicroProse topped the list. Although sceptical they’d be interested – Nick Gollop was a huge fan of Civilisation, as was Julian with the rest of the esteemed outfit’s catalogue – it was nonetheless decided they’d reach out to their Glouchester office. 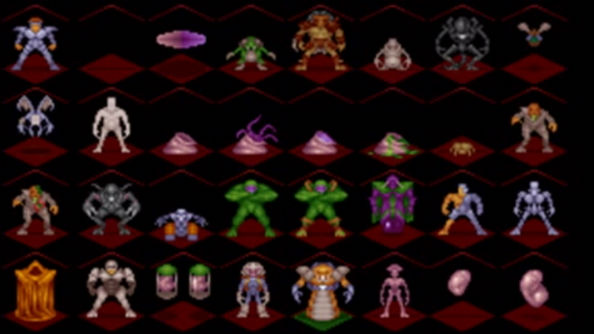 “We thought MicroProse was the best publisher and developer of videogames in the entire universe,” Gollop recalls. “Interestingly, MicroProse UK didn’t really have a clear direction as to what they really wanted to do – they were doing console ports, they were publishing some third party stuff. They had some interesting stuff going on but they really wanted to prove themselves and show that they were able to do games as good as their US partner. That’s why they pushed us to do something that had elements of Civilisation in it.”

In essence, MicroProse saw potential in Laser Quest 2, but wanted things to be bigger. It was to be set on Earth, there’d be research, there was to be something similar to a civilopedia in it, there’d be invading aliens and strong sci-fi elements. As far as MicroProse could determine, these basic notions would facilitate a game worthy of challenging Civilisation in scope, quality and scale; expanding on the straightforward Laser Quest sequel idea into what would become X-Com.

Gollop recalls Gerry Anderson’s ‘70s television series UFO, as well as Timothy Good’s novel Alien Liaison as key sources of inspiration as he set about the research that would back up his first ever design document. When first presented it, MicroProse hated it. 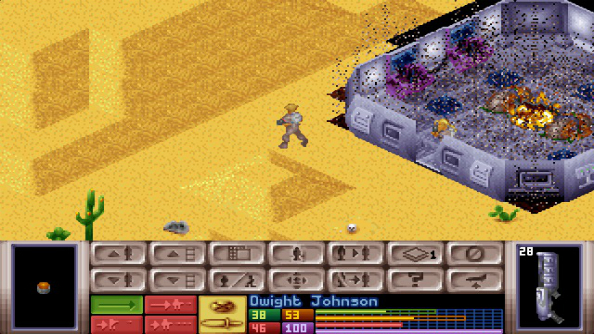 “It was a bit bizarre actually because at first MicroProse wanted me to do a storyboard. I was a bit puzzled on how to do a storyboard for a strategy game because it’s not really a linear story. I did something which was more like something that’d be part of an intro to The Thing, or something. That didn’t impress them. With the initial design document, they didn’t understand how the game actually worked.”

Naturally, this struck fear into the heart of Gollop – here was a group of people he so wished to impress with his ideas, completely failing to grasp what he was trying to convey. Yet, when you think about it, this isn’t exactly surprising.

Conceptualising something that had never been done before would have been a challenging prospect – X-Com was unique in its design projections and there were no other games around at the time attempting what it said it would – thus for MicroProse to struggle with its premise at this stage should not only have been expected, but underscored the fact that Gollop was onto something special. 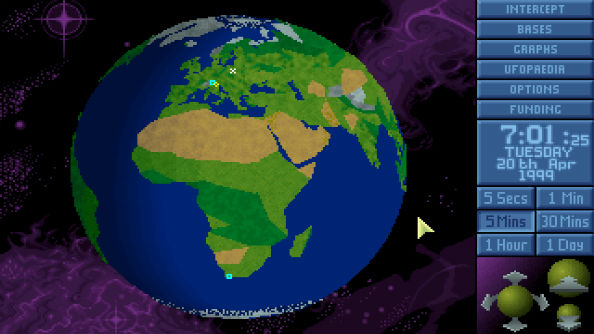 Comprising just four people – Gollop, his brother Nick, and two artists John Reitze and Martin Smilley – the X-Com team was formed. Up to this point, Mythos Games had grappled with the technical restrictions relative to the era: programming games on PC was an inherently difficult process as a result of crude memory models, lacking processing power, and non-specific ways of dealing with memory over one megabyte; yet at MicroProse, Gollop was introduced to state-of-the-art equipment.

Gollop’s brother Nick’s dedication to X-Com was outlined by the game’s revolutionary mechanics which hold up some twenty one years onward, not least the game’s Geoscape. As a 3D-modelled, fully-rendered, real-time Earth screen, the Geoscape granted players access to X-Com’s multitude of strategy and planning elements

In real-time, a day and night cycle operated as the Earth revolved around the sun – meaning certain missions were only accessible at certain points throughout the day. In Battlescape, X-Com’s other distinct view screen, elements of permadeath and procedurally generated scenarios kept things ticking over – much of which can be seen in modern videogames today, all testament to X-Com’s legacy.

And it very nearly didn’t happen. 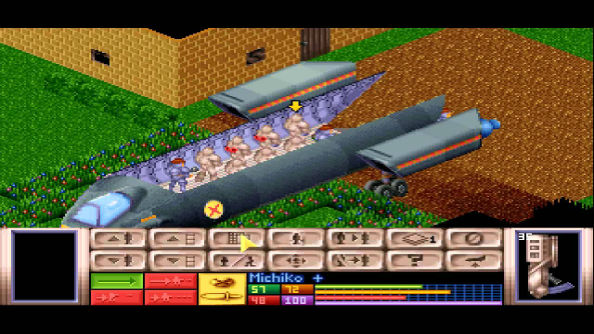 It wouldn’t be until Spectrum HoloByte approached MicroProse UK in December 1993, asking them to deliver a quick-fire project before the end of the financial year the following April that X-Com would officially resurface. Spectrum HoloByte got back on board, but the pressure of meeting the new deadline inevitably fell squarely on the shoulders of Gollop and his three-man crew.

“I know Nick was very worried that people wouldn’t think it was anything special at this point,” admits Gollop. “I was kind of thinking that it was fundamentally okay, but a bit unfinished. In my opinion we really needed to work a bit longer on it. We crunched pretty hard at the end of the project for about two or three months, and we managed to get it into pretty good shape in a short space of time.

“The thing I was most worried about was that I’d never really played through the whole game so I didn’t really have a good feeling of the pace, the progress, the balance of it, especially because there was so many random elements in it. It was a bit uncertain, really. From that point of view, I had some uncertainties.”

But this was a game that offered players so much: so much to do, so many intricate systems to master, so many variable and manipulatable mechanics – looking back now, it’s hard to imagine such reserve from Gollop and his team. In March 1994, to the delight of Mythos Games, UFO: Enemy Unknown launched for PC and Amiga in Europe, and by summertime in the US – the same game under the banner of X-Com: UFO Defense. 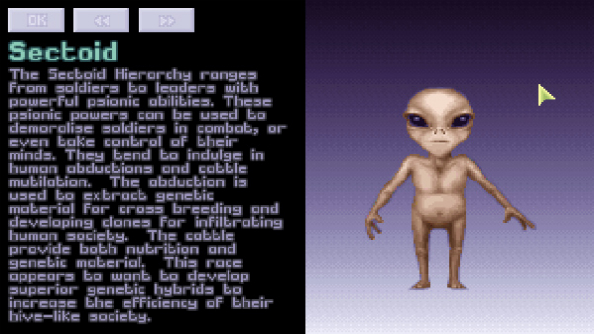 What was less satisfying for Gollop, though, was how the X-Com name fared following his work on the inaugural series entry. Given X-Com’s wide commercial and critical success upon release, a sequel was almost inevitable – however whilst Gollop and his brother started work on ‘97’s X-Com Apocalypse in 1994, X-Com Terror From the Deep released in 1995.

X-Com Interceptor followed in ‘98, as did X-Com First Alien Invasion in ‘99, and lastly X-Com Enforcer in 2001 – all of which suffered underwhelming reviews, causing Gollop to believe they’d be ruthlessly churned out off the back of the original’s success. He believed X-Com had lost sight of what made it special, something he held so dear.

There was a point where he’d almost had enough.

“I’m not sure I’ve told anyone else this, actually,” says Gollop. “But at the point that Take2 made the first announcement of an X-Com game, which became The Bureau, when they first announced it was going to be an FPS, I was so outraged that I was determined that I would start a crowdfunding campaign to do a proper X-Com game. I changed my mind when Fireaxis announced their version of X-Com because I knew they would actually do a pretty good job of it. There was a brief period there were I was going to do it, but it didn’t last.”

With Fireaxis’ successful take on X-Com, Gollop feels he’s now in a position to let it go. He laments how redundant the Geoscape function became in the game’s transition to FPS, yet it’s small change given how lost he reckons the series was beforehand, and how well Fireaxis did in reviving it. 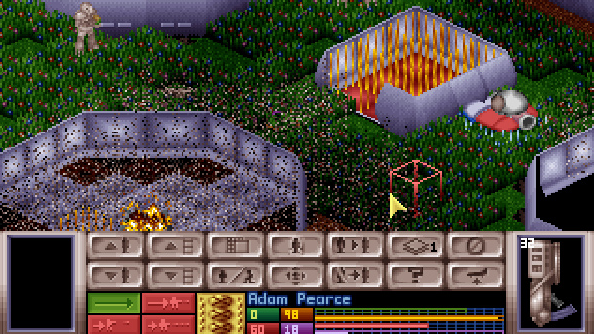 Gollop’s now moved onto pastures new with his next venture – the Kickstarted remake-cum-successor-cum reboot of 1985 classic Chaos, titled Chaos Reborn. Since X-Com, Gollop has worked on a number of other projects, but X-Com, due to its ambition, scale, and place in time, was by far the most demanding.

Chaos Reborn carries with it a familiar crowd of dedicated fans – a result likely derivative of a dedicated fan-base, coupled with Gollop’s gravitas. Whilst Gollop suggests modern day publishers are of the view that turn-based strategy games don’t sell, he’s out to prove otherwise with something new.

X-Com was unique in so many ways, not least its development process, Gollop tells me. I ask him what he’s learned from the entire experience.

“One thing that I’ve learned? Um… What have I learned?” he ponders. “Well, I keep thinking that I’ve learned not to be too ambitious but maybe I haven’t, really. One thing I learned that I still appreciate a lot is that working with other people who are talented or share your vision is very, very important.”