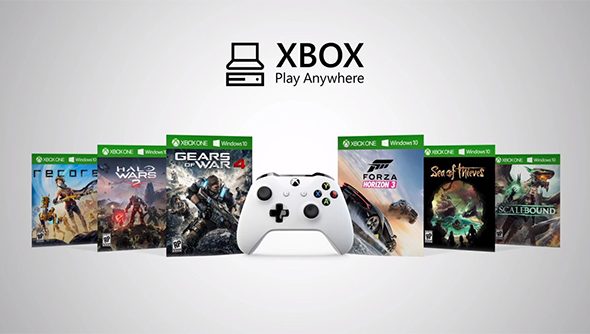 Did you know your PC is secretly an Xbox? Well, not quite – your Xbox One is probably bigger, for starters – but Microsoft’s plans to further sychronise gaming on Windows with its 20 million selling console has been placed front and centre during E3.

Xbox Play Anywhere is the Redmond giant’s new scheme that allows you to buy a game once and then play it on either Windows 10 or Xbox One. Only available digitally (at least currently), ever since the venture was unveiled at the firm’s Xbox briefing at E3, gamers have been eager to find out which games will make the line up.

And now we know. Predictably they’re all Microsoft releases, but it’s not a shoddy roster by any stretch of the imagination.

In 2016, ReCore, Forza Horizon 3 and Gears of War 4 will all be available on Xbox Play Anywhere, while in 2017 we’ll be able to take on Crackdown 3, Scaledown, and Sea of Thieves, amongst numerous others. You can check out the full list here:

Players aren’t just able to play the same games on both platforms, they can also transfer their saves, DLC and Xbox Achievements from one format to the other. Selective games with online multiplayer will also allow PC and Xbox One players to take each other on in play. (We think we know who will win that particular contest).

It’ll be interesting to see if Microsoft can coax other publishers to sign up to the service in the months and years ahead.