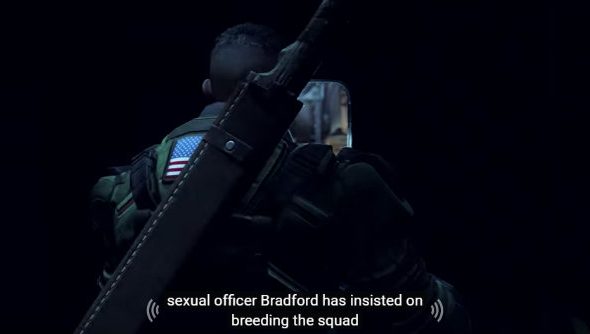 It’s a brave new world with XCOM 2’s latest DLC, Alien Hunters. Humanity has realised nobody is making kids anymore, so the future of our race is threatened. This observation has prompted Central Officer Bradford to change his name to Sexual Officer Bradford – he’s armoured up and ready to shag the aliens back into space. They should have called it SEXCOM.

Celebrate this shift in direction with our list of PC’s best sex games.

Oh wait, none of that is true – it’s just YouTube’s closed captions playing up…

Oh well, at least Bradford will be getting down and dirty on the battlefield, as he’s insisted on leading the squad against an all-new enemy in this latest XCOM 2 DLC.

Not only will your squad be led by the Sam Fisher lookalike, they’ll also be fitted with some new tech and weaponry. You’ll be able to apply skills taken from the new enemy types to your own soldiers, too, with what looked like a double-fisted ground pound showcased in the trailer.

Have a watch below – with closed-captions on, obviously:

Alien Hunters is available now on Steam for $9.99.