After what has felt like the longest week in gaming history since Dawn of War’s launch window, XCOM 2 is finally releasing for me, you and the rest of the resistance tonight. In case you’re wondering why that’s important, Jeremy’s XCOM 2 review should set you right – it’s a belter and the first bonafide shot at a PC game of the year. The exact times of release vary by continent, but it will be available tonight for everyone. Firaxis have also revealed that the various pre-customised members of the development team as recruits are an optional extra, rather than a default part of the character pool, and how to import them if you want them.

XCOM 2 is one of the inaugural members in our already burgeoning list of the best PC games of 2016.

To clarify on the above image, here’s the exact release times for each region by their local timezones:

Those of you lucky enough to live in the eastern portions of the world will have it in just under 10 hours and I am exceedingly jealous. The rest of us will probably get the majority of our play time in tomorrow evening and through the weekend, though it ain’t too bad living on the west coast of the Americas either – unless your European mates are pulling all nighters and getting six hours ahead of you. Bastards. 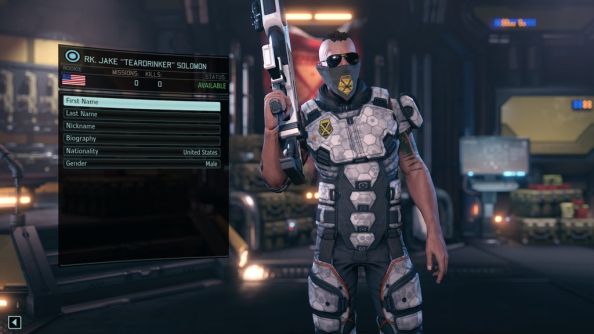 Meanwhile, a post on the official blog details how to get the development team character pool into your game. The intention for this feature is to let players keep old favourite soldiers or particularly immaculate recreations of friends, family, pets and celebrities in the batches of recruits that the game will spit out randomly when you go to get some more cannon fodderbrave heroes. The dev team have used this as an excuse to let us all play with their personal recreations of themselves if we like, but kept it as an optional extra incase anyone finds it breaks immersion. Also means it functions as a handy tutorial for the tools involved.

Here’s how to get them in once the game launches:

Simple. Then, of course, send screengrabs to designerJake Solomon every time he meets an unfortunate demise. Have a scroll through Producer Garth DeAngelis’ feedfor a preview of the others.