Considering they’re little more than chess pieces with guns to move around, I’m incredibly attached to my XCOM squad. A team of men and women doing their damned hardest to strike back at an occupying alien force, I find myself cheering them on at every move.

Looking to add even more personality to your team of freedom fighters? Try out the best XCOM 2 mods.

It’s is an odd thing really: they barely have any dialogue, never mind a personality. Yet I find my bond with my XCOM agents stronger than with any other gaming character. There’s something that even the most honed, layered, realistically-written characters in games can’t compete with, and that’s the love a creator has for their creation. And thanks to XCOM 2’s incredible customisation features, crafting characters has never been more fun.

My squad is mostly made up of my colleagues from PCGamesN. Leading my team you’ll find news-editor-turned-ranger Ben Barrett. Patching them up is our beloved medic Jeremy Peel. And shredding aliens to pieces with his bright pink, heart-stencilled rotary machine gun is Fraser Brown. I’ve spent hours fixing their hair and makeup to be just right, creating effective doppelgangers. 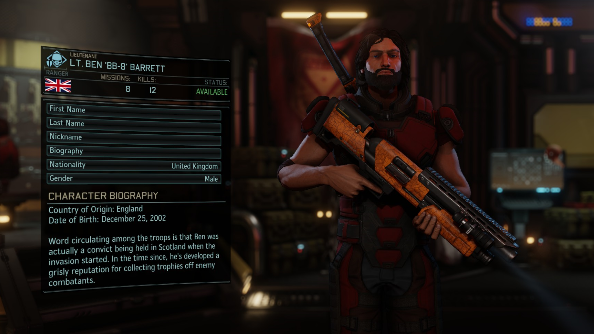 Beyond selecting a face and barnet, XCOM 2 allows you to write personalised bios for each soldier. It allows you to inject a fun level of fiction into the game, and there’s unlimited freedom even if you want to rigidly stick to the game’s canon. With the story being little more than ‘the world was taken over by aliens’, you can flesh out the lore to your own tune in each bio you write. Or, more likely, just be very silly with them. For anyone who loves writing, this is one of the best implementations of custom text I’ve seen.

The interesting thing is how your changes do nothing to affect the actual game. It’s all cosmetic and surface; anything you do to your squad in the customisation screens makes no difference to their abilities in battle. Yet every change is a tweak that makes that squaddie more personal to you. Sure, the game doesn’t realise that your star sniper worked her way up the XCOM ranks in order to avenge her dead sister, but you do, and that’s what matters.

The attachment you forge by personalising each squaddie adds a unique element of drama to combat, especially when it comes to the moments where the game rolls its invisible dice. As your soldier raises their rifle and squints into the scope, you can’t help but hold your breath a little. Will they succeed? You’re relying on them to score that hit, because if they don’t, that risky move really won’t pay off. 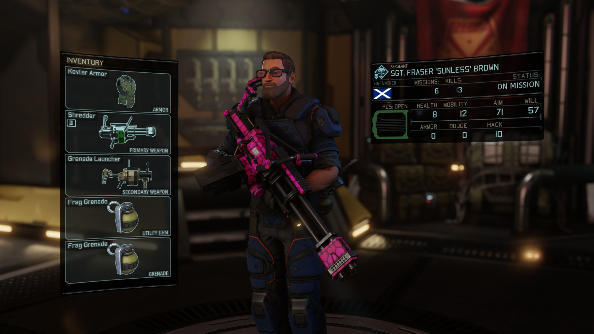 And when the bullets do connect, and that sectoid is splattered against the wall, or that floor collapses from beneath a roof-top sniper, it’s a genuine fist-pump moment. That’s something that XCOM 2 manages to do on repeat; thanks to the superb balance of pace and fear that comes with every mission, each turn feels like a trial and (hopefully) a triumph. There’s rarely any guarantees, so every victory – be that a single enemy or an entire squad – is hard earnt.

It may be you as a player calling the shots, and thus responsible for the success or failure of the mission, but it’s hard not to attribute those victories to your soldiers. As missions go by and they rank up, you begin to build a history with them. You were there when they brought down that sectopod that earned them their final promotion. You asked them to brave a dash across the map that saw them narrowly avoid overwatch fire. And it was you, yes you, who thought it would be safe to leave them out of cover for a turn, which resulted in them being reduced to paste.

In life, it feels like each soldier is racking up their own achievements, but in death it’s nothing but your own fault. You were a bad leader. You carry the burden of their death as if you’ve just lost a friend (which you probably have if you’ve personalised your team to represent people you know.) You vow to do better next time. 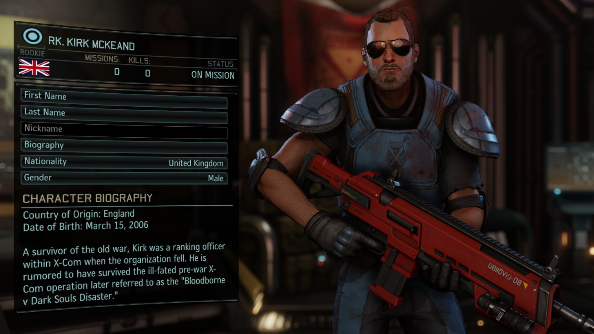 And if that wasn’t bad enough, you can write a personalised epitaph on deceased soldier’s gravestones, which sits beneath a portrait of their face. Be sure to make it something their family would be proud of.

XCOM 2’s nature means you’ll likely witness the recruitment, life, and demise of a squad member in a single session. But across those few hours, thanks the the strength of the game’s customisation features combined with human imagination and emotion, you’ll experience elation and depression in equal measures. Your squad will provide war stories better than any told in the likes of a narrative, tightly scripted campaign. And that’s pretty brilliant considering all they can say is “Copy that!”.