A couple of bits of XCOM 2 info have popped over the last couple of days. I wasn’t even going to look at them for fear of spoilers – I know I’m all-in now, so as much of it should be a surprise as possible – but you might not all feel the same. Heroically sacrificing my own experiences for yours, I bring you news of XCOM 2’s Cyberdisc replacement called The Gatekeeper, a be-tentacled horror-show of psychic powers and death. Plus the Slums tileset which looks like a lovely place to fight over, if not live in.

The Gatekeeper is one of the highest-level-looking enemies we’ve seen so far. Definitely a terror weapon and with some amount of heritage owed to the legendarily unkillable death machine that is the Cyberdisc. IGN had the scoop on it and, as you can see below, it really likes killing people, turning them into zombies and then killingloads more people.

No, no I think that can stay over there, where I’m not, cheers.

Meanwhile on the official site, Firaxis have previewed another one of their new tilesets, this time set in the slums of the ADVENT cities, on the fringe of proper civilization. They’re fraught with crime and basically ignored by the government services. But hey, at least they’re nice to look at: 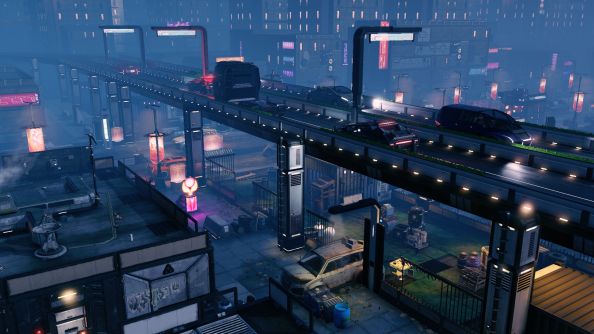 These areas are meant to provide stark contrast between the promise being told by ADVENT about the better life available for humanity under their protection and the reality. Lots of immaculate statues built by the invaders surrounded by disease and squalor. I don’t know if there’s some sort of bait and switch being planned, but they’re pushing the narrative awfully hard in this post, to the point of the writing being a little hackneyed.

I understand that XCOM has never been the most subtle of series – we’re humans so we’re the good guys, they’re not so they aren’t – but Enemy Within and Unknown both managed to push that with a little edge, characters with a bit of dark side to them, and the EXALT human faction of bad peeps. Hopefully these marketing materials aren’t representative of the final quality of writing in the game, which was something I found myself surprisingly enjoying in the 2012 edition.

XCOM 2 is go for invasion on the 5th of February. Are you ready for it?